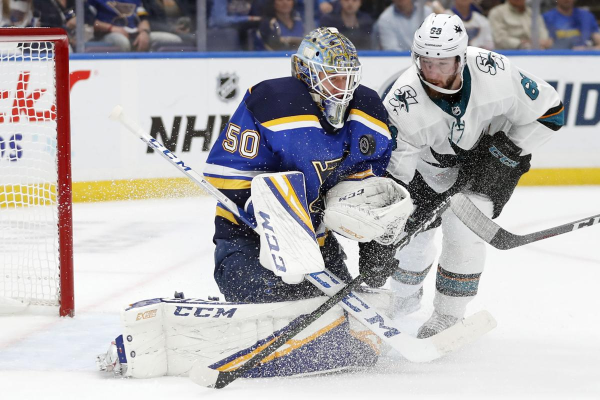 The Boston Bruins have already punched their ticket to the Stanley Cup Finals, and are now just waiting on an opponent. The St. Louis Blues and San Jose Sharks are battling in the Western Conference Final for the right to play the Bruins. This series will need at least another two games after the two teams split the first four games in this one. San Jose will have home-ice advantage for the final three games and will host the pivotal Game 5 on Sunday afternoon.

St. Louis could easily be up 3-1 in this series if it wasn’t for a blown call that cost them in Game 3. The Blues bounced back in a huge way in Game 4 of the series, winning by a score of 2-1 to even up the best-of-seven series at two games apiece. The Sharks have gone 7-3 in their first 10 games at home in this postseason, and it clear that they feel much more comfortable playing on home ice in San Jose. The Sharks are -130 over the St. Louis Blues in this Game 5 matchup on Sunday.

The St. Louis Blues needed to regroup in Game 4, and they got some help from some unlikely heroes in earning the victory. Rookie goaltender Jordan Binnington stole the show in that game, setting a franchise record with his 10th playoff win as a rookie. Binnington stopped 29 of the 30 shots that he faced and really shut down an explosive Sharks offense. Ivan Barbashev registered his first goal of the playoffs just 35 seconds into Game 4 to set the tone for that contest.

With the Blues now hitting the road for Game 5, it is going to be important for their stars to step up and play much better in this game. Vladimir Tarasenko is easily the best offensive weapon on the Blues’ roster but has disappeared at times this postseason. Tarasenko has scored just six goals and tallied three assists in the playoffs. Jaden Schwartz leads the team with nine goals and 13 points and could help his team out with more scoring in this game. The Blues have gotten some clutch wins on the road already this postseason and will need another one on Sunday.

Sharks Need Their Offense in Game 5

San Jose was one of the most explosive offensive teams all season long, but their offense laid a huge egg in the Game 4 loss. The Sharks managed to get 30 shots on goal in that loss, but they didn’t generate enough offensive chances. Goaltender Martin Jones did his best to keep his team in the game by stopping 20 of the 22 shots he has faced. Jones has stopped over 90 percent of the shots he has faced in the playoffs but has been bailed out by his offense at times as well.

The Sharks also need their stars to step up in this game, and they have plenty of players to choose from. Center Logan Couture has been the most impressive player in these playoffs and leads the team with 14 goals and 20 points. The Sharks also have a pair of defensemen in Erik Karlsson and Brent Burns who have chipped in with 32 combined points this postseason. San Jose wants to play fast and score a bunch of goals, and they have the talent to get the job done.

The St. Louis Blues should come into this game with a ton of momentum, but the Sharks have been battling through adversity this entire postseason. San Jose has made a habit of winning on their home ice, and their ability to score goals in a hurry will lead them in this game. St. Louis will likely force a Game 7 with a victory in Game 6, but Game 5 will belong to the Sharks. Bet the San Jose Sharks -130 over the St. Louis Blues.