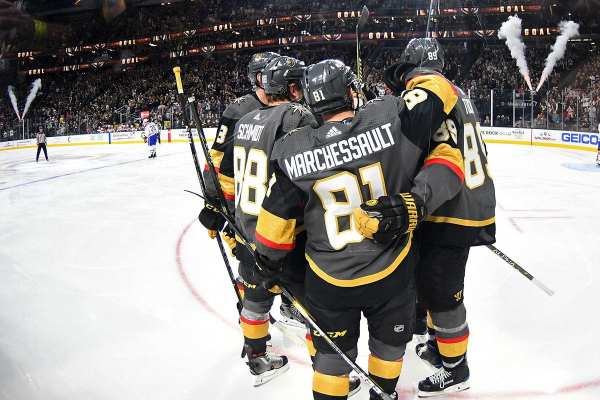 With the regular season winding down, only a small handful of teams have officially punched their ticket to the postseason. Most of them are still fighting for the “x” next to their name, and two of those teams face off tonight. The Vegas Golden Knights (42-28-6, 3rd Pacific) take on the ColoradoAvalanche (34-29-13, 5th Central) in Denver.

Despite two straight losses, Vegas is at 90 points, with a wide nine-game cushion over the Coyotes for third place in the division. They become the fifth team in the West to clinch a playoff spot with a win in any fashion tonight. As for Colorado, Arizona’s 1-0 win yesterday forced them into a tie with the Coyotes for the final Wild Card spot at 81 points. The Avalanche still have the advantage of one less game played.

In the last meeting on February 18th, the Avalanche blanked the Knights 3-0. Tonight, Vegas is favored on the road -125.

One win is what stands in the way between now and the GoldenKnights reaching the playoffs for the second time in as many years. Following a slow start, Vegas has put together a strong second half, including a 7-2-1 record over their last 10 games.

Vegas in 12th in goals and only 23rd in shooting percentage, but manage to get the second-most shots on net. They’re also a very good defensive team, with the seventh-fewest goals allowed and fifth-fewest shots allowed, along with a top-three penalty kill.

Mark Stone has eight points in 13 games with Vegas, 70 points overall. Nine other players including Jonathan Marchessault (55), William Karlsson (52) and Max Pacioretty (39) have 30 points or more for this balanced Vegas team.

With Marc-Andre Fleury still day-to-day with a lower body injury, Malcolm Subban will start in net. Subban is 7-8-1 with a 2.91 goals against average and .902 save percentage.

Colorado has spent time in first place and last place this season. All of the twists and turns have led them to a point where a playoff spot is very much in reach, but will have to work hard to make it happen. The Avalanche are 6-3-1 over their last 10, and are tied with the Coyotes for the final spot in the West. It will be must-watch when the two teams face off against each other Friday night in Colorado.

The Avalanche are a good offensive team, ranking 10th in goals and eighth in both shots and power play percentage. But they’re 16th in goals allowed and 19th in shots allowed, with their biggest weakness coming from their 27th-ranked penalty kill and second-highest number of penalty minutes.

NathanMacKinnon (92 points) and Mikko Rantanen (87) are the leaders of the Avs. Captain Gabriel Landeskog (69) was on pace with them playing on their dynamic first line, until an injury ended the rest of his season. Behind those stars, four other players have reached the 30-point plateau.

After making several consecutive starts, Philipp Grubauer will start once again for Colorado. Grubauer is 15-9-4 with a 2.71 GAA and .914 save percentage.

Vegas fell short the other night against the Blues when they had a chance to clinch. That won’t be the case tonight. The Knights will shut down the Avalanche on the road and secure their second straight playoff berth. I’ll take Vegas -125.