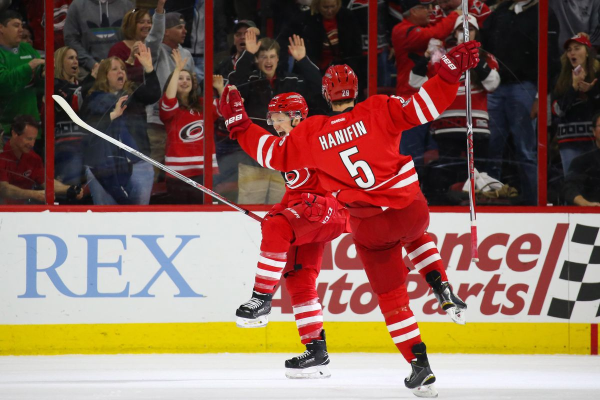 The defending champion WashingtonCapitals had their way with the Hurricanes in Game 5, and are now just one win away from advancing to the next round. They’ll have to do it without T.J. Oshie, who suffered a broken collarbone earlier in the series and is out indefinitely.

But the CarolinaHurricanes will not go down quietly, especially not in front of their home fans who have been desperate for playoff hockey. The Hurricanes, however, are coming off of their worst loss of the entire season.

Here’s a quick Game 5 recap, along with some keys to the game and a final prediction.

Oddly enough, Carolina actually outshot Washington 30-28 in the contest. But Braden Holtby was on top of his game, stopping all 30 shots headed his way. Meanwhile, Petr Mrazek was in net for all six Capitals goals, stopping just 22 of 28 shots in the contest.

Even though it may seem like the Capitals have all the momentum, that would quickly change if the Hurricanes score early and put the Caps in an early deficit. Through five games, not only has the home team won each time, but the home teams have always scored the game’s first goal. If Washington can break that trend and score first, winning on the road will become a lot easier.

Another key for Washington is their pressure right in front of the net. They did a much better job in Game 5, but for the whole series Carolina has been the better team at creating traffic in front of the goalie. Without Oshie in the lineup, having his lesser-skill replacements in front of the net wreaking havoc will help Washington continue to make the most of their opportunities.

Just like for Washington, the Hurricanes must make it a priority to put the last game behind them and score early. But the main thing for Carolina will be their performance with the extra attacker. On Saturday night, they had four power plays and generated just four total shots combined, with those advantages coming when the game was still close. Carolina is 15% on the power play this series, a figure that has to improve for them to win tonight.

A big part of that missing power play has been the disappearance of Carolina’s most-potent scorers. Aside from Warren Foegele, who started the series on the third line, the five other players on the top two lines have combined for 11 points. That includes Sebastian Aho, Teuvo Teravainen, and Nino Niederreiter. For perspective, Ovechkin and Backstrom have 15 for the Capitals alone. The top guys need to show up.

This series has followed a script, where home teams play well early and go on to win in front of their fans. And unfortunately for the Caps, I think the trend will continue. Carolina will put Saturday’s mess behind them, come out strong, and send this to a Game 7. I’ll take the Hurricanes -120.