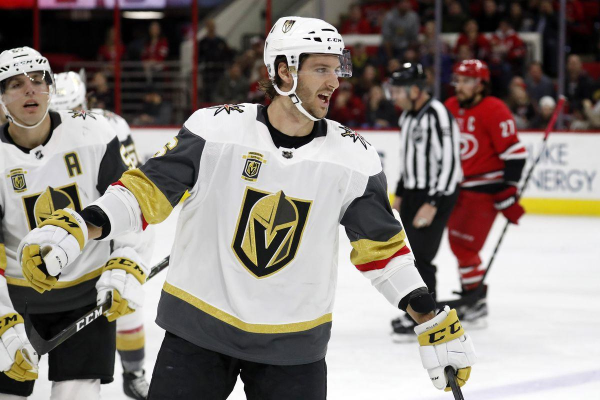 The Golden Knights are 6-3-1 over their last 10 games. Although they lost their last game 6-3 to the Flames on Sunday, snapping their six-game winning streak, they have had several days to rest and recover. Meanwhile, the Stars are 7-3-0 in their last 10, with their most recent win being a dominant 4-1 outing against the Wild on Thursday to move into 3rd place in the Central Division.

It was less than a month ago when these two teams met last, a 4-1 win by the Knights. Tonight, Vegas is favored on the road -145.

The Golden Knights enter tonight’s game sitting 12 points behind Calgary for second place in the Pacific. While the common belief is that Vegas holds on to a playoff spot, the Coyotes have started to close the gap and trail by only four points for third place.

Vegas is a great possession team, which leads to them putting up the second-most shots per game. However, puck luck has gone against them more often than not, and as a result rank just 14th in goals and 25th in shooting percentage. They are a still a good defensive group, sitting in the top-10 in goals allowed, shots, and penalty kill.

New acquisition MarkStone, who came over from Ottawa at the trade deadline, has scored in two straight games and recorded a point in four of his last five. Following his 67 total points, Alex Tuch and Jonathan Marchessault are the next men up with 48 and 47 points.

Marc-Andre Fleury, one of the league’s top goaltenders, is expected to start for Vegas tonight. Fleury comes in with a 34-19-5 record, along with a 2.48 goals against average, .912 save percentage, and eight shutouts.

The Stars picked a good time for their best win of the season. On the road against a Wild team fighting for a playoff spot, the Stars dominated and won 4-1, moving into 3rd place in the Central Division and pushing the Blues to a Wild Card spot. But the momentum must continue, as their 79 points equal the Blues and are two points ahead of the Coyotes in the second Wild Card.

The biggest reason for Dallas’ success recently has been the incredible play of Ben Bishop. Bishop had consecutive shutouts against the Rangers, Avalanche, and Sabres, and pushed his shutout streak to 230:53 seconds versus the Wild. However, a little over halfway through the second period, Bishop left with a lower-body injury, and is currently day-to-day.

Thanks to Bishop, along with an underrated blue line, Dallas is second in goals allowed and fifth on the penalty kill. They still have trouble scoring however, sitting 29th in goals, 28th in shooting percentage, and 23rd in shots.

Tyler Seguin (27-38=65) leads the team in goals and assists, followed by Alex Radulov and his 56 points. It has been a disappointing season for JamieBenn (47 points) as well as defenseman John Klingberg, who missed 18 games with any injury earlier this year.

With Bishop still day-to-day and the injury occurring yesterday, it will likely be Anton Khudobin in net. Khudobin is 13-14-3 with a 2.55 GAA and .924 save percentage.

Dallas has momentum on their side and plays well at home. However, tired legs may be in play, along with playing their backup in net. Vegas is a solid team with no glaring weaknesses, and has had a number of days to rest. I’ll take the Golden Knights on the road -145.