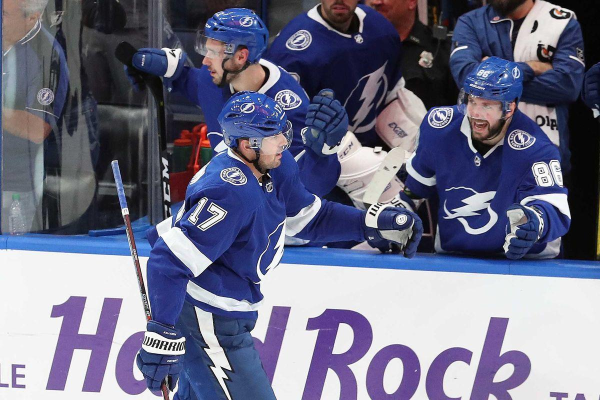 Two of the East’s best battle it out in the final days of the regular season. The league-leading Tampa Bay Lightning (60-16-4, 1st Atlantic) are on the road tonight facing off against the Toronto Maple Leafs (46-27-7, 3rd Atlantic).

These two teams are part of a very small group that have their seeds locked up. Toronto will finish third in the division and go up against the Bruins in the first round in the playoffs. As for Tampa Bay, they will cruise to home-ice advantage for the entire postseason, but await their first round opponent who’s currently battling for the second Wild Card spot.

It was less than a month ago when these teams played one another, when the Lightning zapped the Leafs 6-2 on March 11th. Tampa Bay is the road favorite tonight at -115.

Following their loss to Montreal earlier this week, the Lightning missed their chance to set the record for the most regular season wins. However, a win tonight and in their final game against Boston would tie Tampa Bay with the 1995-96 Red Wings for the most wins in a season. This week, they became the third team in NHL history to win 60 games, joining those Red Wings and the 1976-77 Canadiens.

It’s no surprise why Tampa Bay has had the amount of success they’ve had; they’re a team without a clear weakness. They are first in goals, shooting percentage, and power play percentage, as well as top-10 in goals allowed and penalty kill percentage. Not to mention sensational goaltending and one of the league’s best coaches in Jon Cooper.

Nikita Kucherov has a league-leading point total of 125, two away from tying Alexander Mogilny’s record for most points in a single season by a Russian-born player. Steven Stamkos (43 goals) and Brayden Point (41 goals) have each eclipsed the 90-point mark, and nine additional players have 30 or more points on the season.

Andrei Vasilevskiy, who leads the league in wins, is expected to start tonight. Vasilevskiy is 38-10-4 with a 2.42 goals-against average and .925 save percentage, to go along with six shutouts.

Focused on the Playoffs

With Toronto’s first round fate sealed, it’s easy to rest and focus on the series ahead. But ask any Cup winner and they’ll tell you gaining momentum in the final games is hugely important. Additionally, should the Maple Leafs advance to the second round, their opponent would most-likely be these Lightning, a good scouting opportunity for coach Mike Babcock and the rest of the Leafs.

The Maple Leafs’ strength all season long has been their ability to score the puck. Toronto is fourth in goals and shots, and top-10 in shooting and power play percentages. While moves like the addition of Jake Muzzin have helped their defense, they still rank an average 17th in goals allowed and 16th in shooting percentage, along with allowing the ninth-most shots on goal.

Mitch Marner’s 67 assists make up most of his 92 points, which lead the team. Marner has outscored John Tavares, who has 47 goals and 88 points in his first season with Toronto. Morgan Reilly and Auston Matthews each have 72 points, two of the nine total players over the 30-point mark.

Vezina candidate FrederikAndersen is expected to start in net tonight. Now in his third season with Toronto, Andersen is 36-15-6 with a 2.75 GAA and .918 save percentage.

To put into perspective how good Tampa Bay has been this year, they have only lost back-to-back games in regulation once, when they lost to Ottawa and Buffalo in early November. No team has been better at bouncing back from a loss than them, and now they have history to play for. I will pick the Lightning (-115) to beat the Maple Leafs and inch closer to their place in the record book.