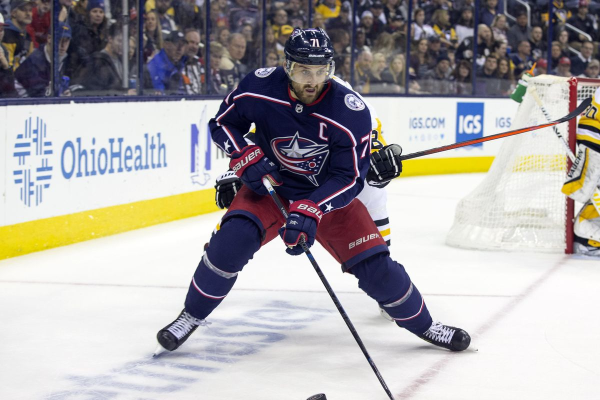 The EasternConference playoff race is heating up, and two of those teams in the mix will face off on Monday. The Columbus Blue Jackets (38-27-3, 5th Metropolitan) will visit the New York Islanders (39-22-7, 2nd Metropolitan) at Nassau Coliseum.

Both teams have been sputtering as of late. The Blue Jackets are 5-5-0 in their last 10 games, and find themselves tied with the Canadiens for the final Wild Card spot in the east. As for the Islanders, they’ve gone 4-5-1 in their last 10, falling behind the red-hot Capitals for first place in the Metro.

This is the third meeting between these teams this season, with the Islanders winning both. New York is favored slightly at home, listed at -110, although some books have this game being even money.

Fight to the Finish

Tasked with the decision to hold onto impending free agents Artemi Panarin and Sergei Bobrovsky or trade them away at the deadline, the Blue Jackets opted for the former. In addition, they added Matt Duchene and Ryan Dzingel in separate trades with the Senators, along with backup goaltender Keith Kinkaid. However, since the February 25th deadline, Columbus is just 3-4-0, with just one of those wins coming in regulation.

Over the course of the whole season, Columbus is 11th in goals, 15th in shots, and 14th in shooting percentage. Defensively, they only rank 13th in goals allowed, but seventh in shots allowed and third in penalty kill.

Panarin leads the charge with 73 points, followed by CamAtkinson and his 63 points, which include a team-high 38 goals. New acquisitions Matt Duchene and Ryan Dzingel each have four and three points for their new team, respectively.

Bobrovsky is expected to draw the start tonight. The veteran is 29-21-1 with a 2.77 goals against average and .906 save percentage.

In first place for much of the season, the Islanders are dealing with a recent rough patch. Since choosing to stand pat at the deadline, NewYork is 3-4-0, the same as the Blue Jackets. They’ve also given up 18 goals in their last five games overall.

Giving up over three goals a game is an uncommon concept for the Islanders who lead the league with the fewest goals allowed. However all year they’ve struggled offensively, ranking 20th in goals and second-to-last in shots.

Matthew Barzal and Josh Bailey are the point-leaders with 55 and 50, respectively. Following them, just five other players have reached the 30-point mark, including Brock Nelson (44) and Jordan Eberle (30).

In what has essentially been an even timeshare in net, ThomasGreiss is projected to start over Robin Lehner. Greiss is 19-11-2 with a 2.33 GAA and .924 save percentage.

The Islanders have controlled the first two matchups, but I think it’s the Blue Jackets’ turn. Columbus is the better possession team, is great on the road (20-11-1) and has more at stake. I’ll pick the Blue Jackets to win +100.