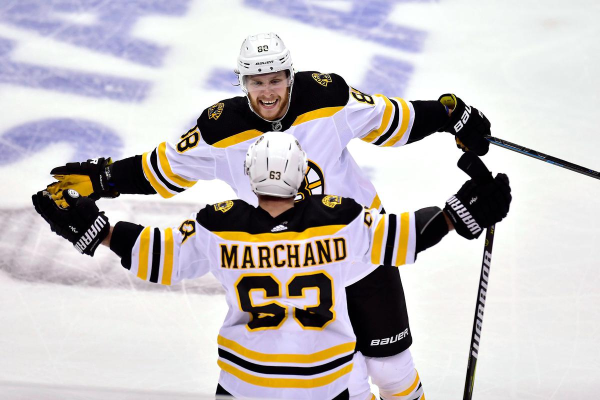 Coming off of an epic Game 5, the Bruins have a chance to close out the series with a road win tonight. But the Blue Jackets will lay it all on the line in hopes of extending the series to a do-or-die Game 7 in Boston.

Here is a quick recap of Game 5, some keys to victory for tonight’s game, and a prediction.

David Pastrnak’s tip-in goal with 1:28 left capped an insane third period as the Bruins came out victorious 4-3. Pastrnak’s goal was one of the six total goals that came in the third, which included a stretch of four scores in approximately three-and-a-half minutes. After Boston went up 2-0 early in the third, Columbus rallied with goals from Seth Jones, Ryan Dzingel, and Dean Kukan, eventually tying the game at three. But it was Pastrnak, who had another goal earlier in the third as well, who was the hero for the Bruins.

In Boston’s two road wins against Toronto and the Game 4 road win this series, the Bruins were able to have good starts in each of them. Getting out ahead early and playing with the lead as opposed to chasing the lead would be ideal, taking the home crowd quickly out of the equation as well. In those three games, Boston outscored their opponent 14-7, a sizable difference that shows how important the first period will be tonight.

In Saturday’s game, Blue Jackets coach John Tortorella shortened his bench up as the game went on, opting with playing three lines instead of the full four. While Columbus may do this again and have more-talented players on the ice than normal, this could be an advantage for the Bruins. If they can capitalize on tired legs and get solid play from their own bottom two lines, Boston could very well end this series tonight.

When the Bruins commit penalties, the Blue Jackets have to make them pay. That may be the single biggest key for Columbus, and the last four games prove it. In Games 2 and 3, both wins, the Blue Jackets went a combined 3-for-7 on the power play. However in the last two games, both losses, they went a combined 0-for-6 on the power play, including an 0-for-4 performance in Game 4 on home ice. Columbus’ power play cannot afford to be absent for a third straight game.

As mentioned earlier, a fast start for both teams is important. Columbus has scored the game’s first goal just once this series, so setting the tone early would be huge. They will also need to tighten up their play later in the game. Columbus’ three-goal outburst in the third period was mitigated by Boston’s three goals, as the Jackets weren’t able to match their intensity on offense to the defensive end. Limiting Boston’s scoring chances and playing hard for the full 60 minutes is crucial.

Facing elimination for the first time this postseason, I expect Tortorella to juggle his lines around once again in an effort to do whatever it takes to win. Ultimately, I think Columbus is successful, scoring on the power play again and living to fight another day. I’ll take the Blue Jackets -125 to send the series back to Boston for Game 7.