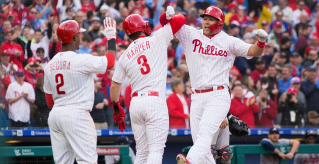 With the season nearly finished, huge playoff implications are on the line this afternoon in Pittsburgh. It’s a battle of two teams neck-and-neck in the playoff race, as the Carolina Hurricanes (43-28-7, 4th Metropolitan) take on the Pittsburgh Penguins (42-25-11, 3rd Metropolitan).

At 93 points, a regulation win would put Carolina into a tie with Pittsburgh in points, and tie-breakers would actually put them in third and the Penguins in a Wild Card spot. A Pittsburgh win, and the distance between them and Carolina widens.

The record in head-to-head games this year favors the Hurricanes 2-1, with Carolina winning the last matchup 3-2 in a shootout back on March 19th. Today, Pittsburgh is a sizable favorite at home, listed at -145.

In a season where postgame celebrations have been the biggest story surrounding them, the Hurricanes have quietly become a very good team who no one wants to face in the postseason. Carolina is coming off of an impressive 5-2 win over the Flyers yesterday, one that eliminated Philadelphia from playoff contention.

The Canes still need a few things to happen to secure a postseason spot, as they hold a one-point lead over Montreal, the only remaining team in the East who is outside the playoffs and not eliminated. Overall, Carolina is 6-4-0 in their last 10 games.

Carolina is not a great scoring team, ranking 17th in goals and 25th in shooting percentage. But they certainly make it difficult, averaging a league-high 34.5 shots per game. Defensively, Carolina is top-10 in goals allowed and penalty kill, and allow the third-fewest shots.

The Hurricanes are healthy, and are led by a pair of dynamic young forwards. Sebastian Aho (82 points) and Teuvo Teravainen (72 points) are stars who can find the back of the net, but also create scoring opportunities (52 assists each). Six other players have eclipsed the 30-point, including new acquisition Nino Niederreiter (50 points) and second overall pick from the 2018 draft Andrei Svechnikov (36 points).

After Petr Mrazek started last night, Curtis McElhinney is expected to start today. McElhinney is 19-10-2 with a 2.55 goals against average and .913 save percentage.

Hanging by a Thread

With an extra game in hand and only a four-point deficit, the Penguins would love to move up the standings and pass the Islanders in order to gain home-ice advantage in the first round. But Pittsburgh first needs to clinch their playoff spot, something that is still up for debate with Montreal down by only three points. Pittsburgh is 6-2-2 over their last 10.

Pittsburgh is a very deep team with a strong offense. They’re currently sixth in goals and shots, seventh in shooting percentage, and fifth in power play percentage. They are more on the average-side defensively, ranking 14th in goals allowed and a poor 26th in shots allowed.

Unlike the Hurricanes, the Penguins are battling some injuries, including a pair of upper-body injuries to stars Evgeni Malkin and Kris Letang. Sidney Crosby is healthy, though, and having another spectacular season with 94 points. Not counting the two injured players, five other players are over 30 points, including former All-Star Phil Kessel (78 points) and leading goal-scorer Jake Guentzel (38 goals, 72 points).

This will simply come down to how good Murray is in net. Carolina puts up a ton of shots, and Pittsburgh allows a ton of shots. But I think Murray is up to the task, and the Penguins will control the pace and take advantage of a tired Hurricanes team to win and inch closer to clinching. I’ll take the Penguins -145.