Cowboys vs Rams picks and analysis 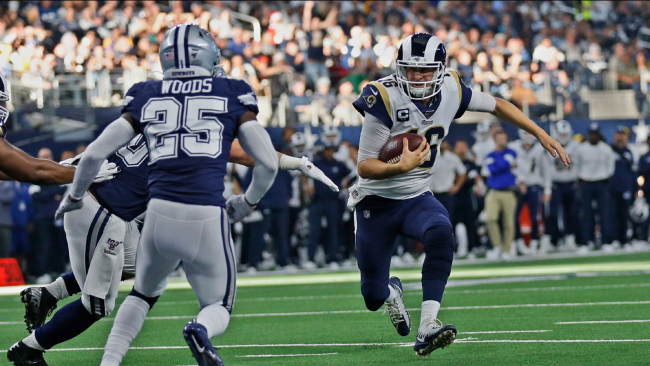 Two teams coming off disappointing 2019 seasons will get together for the first Sunday night game of the year when the Dallas Cowboys visit the Los Angeles Rams.

The Rams entered last year as one of the league favorites and won their first 3 games. But after that, Sean McVay seemed to lose the shine that followed him everywhere in 2018 when the Rams represented the NFC in the Super Bowl.

Los Angeles lost 7 of their remaining 13 games after that 3-0 start and missed the playoffs. Similarly, the Cowboys entered the year with expectations. But despite the opportunity presented by a weak NFC East, they finished 8-8, 1 game behind the Eagles for the division crown. Both teams have made key offensive additions as they look to right the ship in 2020.

For Dallas, the focus is on the offensive side of the ball. They already had big names in Ezekiel Elliott, Dak Prescott and Amari Cooper. But they added even more to the arsenal by taking CeeDee Lamb in the first round of the draft. Also, Mike McCarthy takes over for Jason Garrett as the head coach. McCarthy has a reputation for wanting to air it out, so a huge year is expected for Prescott. With that, a shootout is definitely possible in this one. You can bet Prescott’s over/under on passing yardage of 287.5. The over will cost you -106 while the under is -118. The over looks like a strong proposition at those numbers. Prescott threw for 288 or more in almost half of his games last year. Sunday’s game should be in perfect weather conditions and he adds Lamb to the list of available options.

The big question for the Rams will be whether or not they can generate a running game. 2nd round pick Cam Akers was brought in to give a boost in that department after Todd Gurley was cut in the offseason. Akers will likely begin the year in a time share with Malcolm Brown and Darrell Henderson. Akers is +105 to score in the game, which seems like a low number considering the presence of the other two. Brown is +135 and Henderson is +180. If you’re McVay, you probably want an experienced runner to take the ball the first time they venture into the red zone. Cooper Kupp (+160) and Robert Woods (+275) seem like better options in this category. The Rams pass catchers should see an uptick with the departure of Brandin Cooks and the fact that McVay wants to re-establish himself as one of the games top play callers. Quarterback Jared Goff has the same over/under line on passing yards that Prescott has at 287.5, but you can buy the over for +125 and the under will cost -157.

Over/Under is a Trap!!

Dallas has a new coaching staff, but there is enough of the same personnel on both sides of the ball to take a look at last year’s meeting between the 2 and see what we can learn from it. The Cowboys won the game 44-21 and it was the running game that led the way. Both Elliott and Tony Pollard went well over 100 yards with Elliott scoring twice and Pollard once. Prescott only had to attempt 23 passes so his numbers were solid but not gaudy. Rams defensive tackle Aaron Donald may be one of the best players in the league, but he did not slow the run that day. With McCarthy at the helm the Cowboys will lean on the pass more than they did last year, but Elliott will get his touches too. He is the favorite to score in the game at -225. His rushing yards over/under is 80.5 at -110 for the over and -113 for the under. The over looks pretty solid on paper. Also, with 65 total points in last year’s battle, you can see why the over/under number is as high as it is at 51.5. Be careful with that number though. The Cowboys are unlikely to run and score with such ease this time.

I give the Cowboys a slight edge in the game, but I like the Rams at +3 for a traditional wager. The Cowboys always get a lot of offseason hype, which may be reflected in this number. In turn, the Rams are a very talented team that many are forgetting about because of the dominance of two of their division mates last year in the 49ers and Seahawks. My favorite play in this one is probably the Rams on the money line at +128, because I do think it’s a close one and they’ll have a chance in the 4th quarter.

Tonight, two pitchers whose records could use a little polishing match up as the St. Louis Cardinals welcome the Miami Marlins to Busch Stadium to open a three-game series. Cardinals hurler Adam Wainwright has not picked up a win since May 20, while Pablo Lopez’s win in his most recent start last week was his END_OF_DOCUMENT_TOKEN_TO_BE_REPLACED