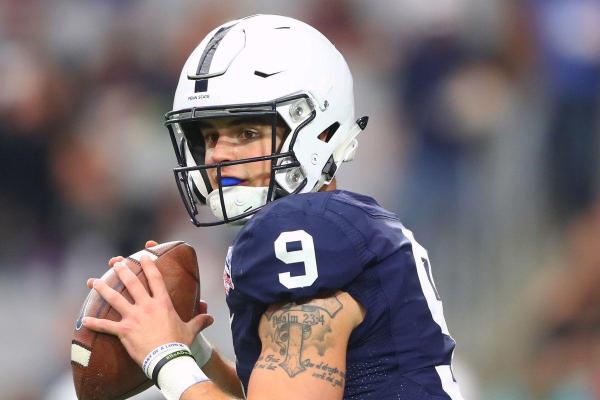 A Big Ten battle takes place on Saturday between two struggling programs. The Wisconsin Badgers and the Penn State Nittany Lions will get together for a noon game. Penn State and Wisconsin have both struggled this year and need a win in this one to get back on track. They have combined to go .500 over their last 10 games this season, and one team needs a win to get their season turned around. They still have tough games to play this year so that could be easier said than done. Penn State is favored to win this game at home by nine points.

Wisconsin comes into this one sitting at 6-3. They have struggled this year mightily and are not where they want to be at this time in the year. They have moved the ball pretty well, but they struggle throwing the ball. This is a team that gets their yardage on the ground, and they are pretty effective at it. They gain 447.2 yards per game, and 273.0 yards of that comes on the ground. They only throw the ball for 174.2 yards per game. Alex Hornibrook leads the team in passing yardage with 1,343 yards through the air, and 11 touchdown passes. Hornibrook has thrown eight interceptions. The leading receiver for the Badgers is A.J. Taylor. Taylor has caught 24 passes for 406 yards. Taylor has gotten into the end zone three times this year. The leading rusher for Wisconsin is Jonathan Taylor. Taylor has run the ball 208 times for 1,363 yards and 11 touchdowns.

Wisconsin’s defense is solid as they only give up 20.9 points a game. They allow 352.8 yards per game and allow 193.3 yards per game passing. This is something that the Badgers are good at, but when the offense isn’t clicking the defense suffers. Wisconsin has scored 28 or more in each of their wins, but if the offense is under 21 points, they lose. This is something that they are going to need to get batter at if they want to win a bowl game at the end of the year this season.

Penn State has done much of the same this year. They run the ball well, but they can also pass it pretty effectively as well. They gain 429.1 yards per game and 221.2 of that comes through the air. Trace McSorley is a great quarterback for Penn State as he has the ability to run or pass the ball. McSorley has thrown the ball for 1,711 yards and 12 touchdowns against just five interceptions. He has also rushed the ball for 611 yards and nine touchdowns. Because of this, Penn State is a very potent offense. They score the ball at a 37.2 points per game clip and only allow 24.4 points per game to opposing offenses. This is a big factor in how they play because if their offense doesn’t score points, it is tough for them to win as they do allow points. They give up 388.6 yards per game and 172.2 of that comes on the ground.

Penn State should be able to pick up the win at home. They are a solid team when playing at home and the Badgers have struggled in big environments this year. Penn State has to get a win to keep their ranking and Wisconsin could move back into the polls with a win. Penn State will be able to score early and often, and when you do that to Wisconsin, it is tough for them to climb back because of their style of play. Look for Penn State to win and cover.