Week 5 is Complete: NCAA Football News and Notes for October 1, 2018 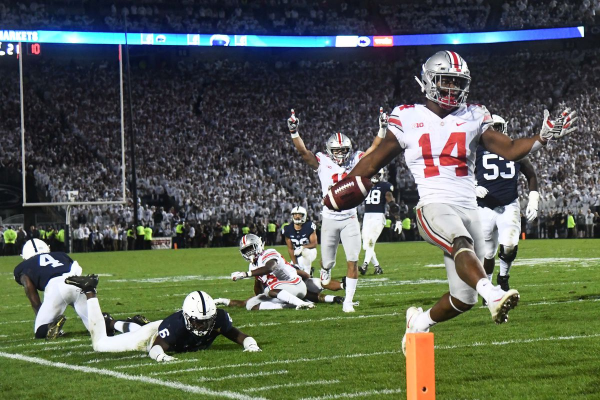 Take a look at some of the most important NCAA Football News following Week 5:

With September behind us, the college football season is in full swing. Nearly every team is into their conference schedule, meaning we can start to expect more intense rivalry matchups with a lot on the line. However, before we get ahead of ourselves, let’s take a look back at what happened this past week.

After each scored a win over another top-10 team over the weekend, both Ohio State and Notre Dame have moved up the polls accordingly. Ohio State narrowly knocked off Penn State in Happy Valley, earning them a trip up to the no. 3 spot. Notre Dame, meanwhile, had a much more convincing win over Stanford at home, bringing the undefeated Irish to the no. 6 spot in the latest polls. Meanwhile, Clemson dropped a spot to no. 4 despite rallying to beat upstart Syracuse at home.

It wasn’t all good news for the Irish, who lost star offensive lineman Alex Bars to a season-ending knee injury during their win over Stanford. Bars is a fifth-year senior with 27 career starts to his name, so losing him for the season is a substantial loss for Notre Dame, even with good depth up front.

Part of what made Clemson’s win on Saturday such a struggle was losing quarterback Trevor Lawrence to injury in the 2nd quarter. It’s unclear the exact nature of Lawrence’s injury, but it involved the head and neck area. Clemson coach Dabo Swinney said Sunday that Lawrence was feeling better after the game and Sunday morning. It’s unclear if he’ll be able to play this week against Wake Forest, but the injury doesn’t appear to be a long-term concern. Chase Brice, who led the comeback on Saturday, will start if Lawrence can’t play. Meanwhile, Swinney refused to answer any questions about former quarterback KellyBryant, who left the team last week after Lawrence was named the new starter.

With Bryant and several other players announcing they would transfer four games into the season, there’s been a lot of talk about the new redshirt rule. Well, guess who’s not a fan of that rule? Alabama head coach Nick Saban, who says players being able to redshirt and transfer midseason is unfair to the teammates that player leaves behind. Saban says the spirit of the rule is to get younger players exposure without burning their redshirt year while also being able to account of midseason injuries that impact the depth chart. Whether you like the rule or not, it’s hard to disagree with Saban’s stance that the rule is not being utilized as intended.

Texas Tech’s 42-34 loss to West Virginia was helped along by an injury to starting quarterback Alan Bowman right before halftime. Bowman, a true freshman who has already thrown for over 1,600 yards in 4 and a half games, suffered a partially collapsed lung when he was simultaneously hit by two defenders. The Red Raiders trailed 35-10 at the half but stormed back in the 2nd half behind backup Jett Duffey. Bowman’s status moving forward is yet to be determined. Texas Tech has next weekend off before a Thursday night game against TCU.

Frustration is starting to boil over for the winless Nebraska Cornhuskers this season. Scott Frost, a former Nebraska quarterback now in his first season as the school’s head coach, called the Cornhuskers “one of the most undisciplined teams in the country” following Saturday’s 42-28 home loss to Purdue. Of course, those comments came a week after Frost said the program hit rock bottom following last week’s loss to Michigan.

Going back to last season, the Cornhuskers have now lost eight games in a row, which sets a new school record. In Nebraska’s defense, a winnable game against Akron the first week of the season was canceled due to weather. Of course, Akron went on to beat Northwestern, so there’s no guarantee the Huskers would have won that game. Things don’t get any easier for Nebraska, who travels to Wisconsin this weekend.

In perhaps the most disappointing moment of the weekend, UMass head coach Mark Whipple inappropriately used the word “rape” during his postgame press conference to describe a penalty he believes the refs missed. As a result, Whipple has been suspended by the university for one week. UMass athletic director Ryan Bamford called Whipple’s remark “highly inappropriate, insensitive, and inexcusable under any circumstance.” Whipple has apologized but will miss this week’s game against South Florida.