Wake Forest vs Clemson College Football Preview: Can Wake Down the ACC’s Top Dog to Clinch the Atlantic Division? 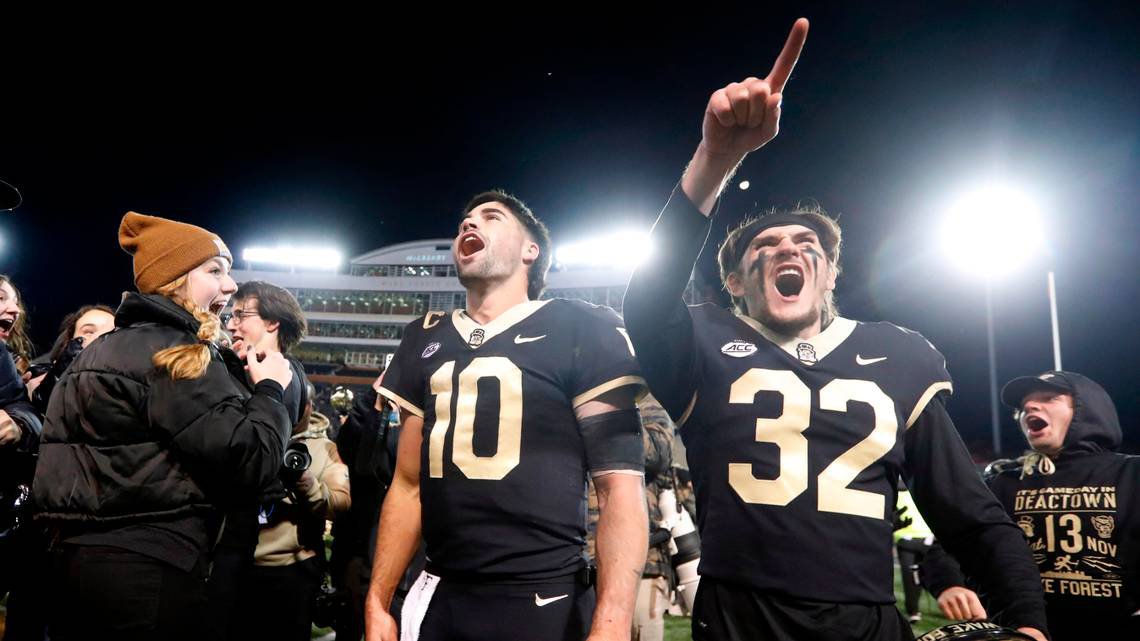 Wake Forest is no longer undefeated, but it has still been a great college football season for the Demon Deacons. For it to be even greater, they have to wrap up the ACC Atlantic Division title. A win at Clemson or next week at Boston College will mark that goal off of their list. But if they can win both games and the right things happen elsewhere, their College Football Playoff hopes could be still be alive going into the ACC title game.

It has been a down year for Clemson, but they could still win the division title. Can their offense, which has struggled all season, take advantage of Wake Forest’s defense to lead the Tigers to a big win?

Wake Forest’s three-point loss at North Carolina a couple of weeks ago is the only blemish on a fantastic season. That collapse could keep them out of the College Football Playoff, as they are 10th in this week’s CFP rankings. But they bounced back for a huge win over North Carolina State and have one hand on the division title.

Wake’s offense is the primary reason for their success and came through again in the 45-42 win over the Wolfpack. The Demon Deacons have scored at least 40 points in five straight games and have not been held below 35 points this season.

Quarterback Sam Hartman is having a big year and might be a more serious Heisman contender were Wake still undefeated. In last week’s game, he threw for 290 yards and three touchdowns and rushed for 43 yards and a touchdown, and he has 39 total touchdowns this season.

But Hartman completed less than 50 percent of his passes against both North Carolina and North Carolina State and was picked off five times in those two games. The Wolfpack scored zero points off of his three picks, but the Tar Heels turned their two gifts into vital touchdowns. He needs to tone down the generosity and stay sharp against the Tigers. Clemson’s offense has still not quite returned from the wilderness but does not need extra help to find its way.

When you score like Wake Forest has done all season, you’re going to win more often than not. But while it is indicative of how good their offense is, it’s also been necessary. Against most of their better opponents, their defense has routinely gotten lost in the same wilderness as Clemson’s offense has. Last week’s game was the fifth time in their last six games that Wake has given up at least 34 points. It’s mind-boggling that they held Brennan Armstrong and Virginia to 17 points in Charlottesville, based on results since that game.

Clemson’s issues on offense this season have been well-documented. Losing T&T (Trevor and Travis) was naturally going to make them a little less explosive, but this level of drop-off was not expected.

There have been some signs of life in recent wins over Florida State, Louisville, and UConn. Clemson has scored 30+ points in three straight games and totaled 476 yards in last week’s 44-9 win over UConn.

Sure, against one of the worst teams in all of college football, you can afford to care less about accuracy and efficiency. But following up the comeback win at Louisville, his most efficient game of the season, with a sharp performance against the Huskies might have been helpful for his confidence going into the biggest game of the season.

Looking at Clemson’s defensive numbers, there are a lot of positives. The Tigers are third in the FBS in scoring defense and in the top 15 in yards allowed per game. They are also among the nation’s leaders in sacks and tackles for loss.

But Wake’s offense presents a challenge that hasn’t been seen much this season. Their biggest challenge to date was against Kenny Pickett and Pitt last month. They held the Panthers scoreless for their first five drives but ended up allowing a season-high 464 yards in a 27-17 loss. If the defense folds similarly against Wake, can the offense keep Clemson in the game?

Will Clemson’s Reign Atop ACC End Against Wake?

There are a few factors that create a little pause with the total for this matchup. The highest number of combined points in a Clemson game this season is 54, in their 30-24 win at Louisville two weeks ago. For all that the offense hasn’t done this season, the defense hasn’t given up more than 27 points in a game yet. Wake’s defense is a major question mark, but can Clemson’s offense take advantage?

Those are certainly things to think about, but it is hard to look at Wake’s more recent results and back anything other than the over. Their 45-7 win over Duke is the outlier in the bunch. Clemson’s offense should have one of its more productive games of the season, win or lose.

Clemson’s reputation still holds a little weight, and Death Valley has been the killer of many hopes and dreams in Dabo Swinney’s tenure. But their 7-3 record is actually rather generous, and while they were able to escape sticky situations against Boston College, Syracuse, FSU, and Louisville, they won’t be as fortunate today.

The 2022 Formula 1 season is only six races deep, but the race for this season’s championship alerady appears to be down to just two drivers. Last season, Red Bull driver Max Verstappen claimed his first Formula 1 World Drivers’ Championship in highly controversial circumstances, with Lewis Hamilton denied what would have been a record-breaking END_OF_DOCUMENT_TOKEN_TO_BE_REPLACED