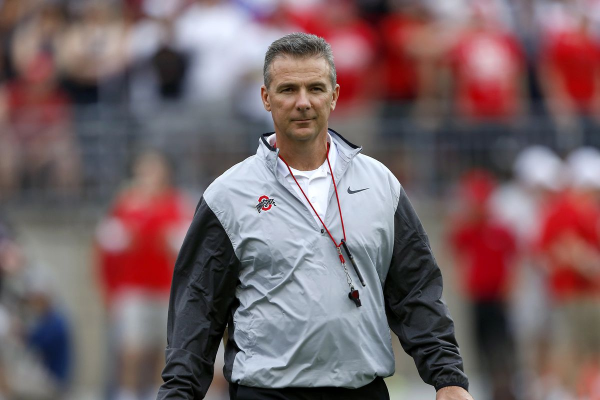 The month of August is here and that means we’re a few short weeks from the season finally getting underway. Let’s check out all the top stories of the past week as we get ready for the season.

The you-know-what may be about the hit the fan in Columbus. Wednesday night, Ohio State put head coach UrbanMeyer on paid administrative leave while they conduct an investigation into whether or not Meyer knew about former assistant Zach Smith being accused of domestic violence as far back as 2015. Offensive coordinator Ryan Day will be the interim head coach until the matter is resolved.

Wednesday morning, college football reporter Brett McMurphy composed a long Facebook post that alleges that Smith’s ex-wife, Courtney, who was allegedly abused by Smith as far back as 2009, states that the wives of Ohio State coaches knew in 2015 about the domestic abuse. Courtney says that Meyer’s wife, Shelley, was among those who knew. Meyer stated last month when Smith was fired that he would have fired him in 2015 had he known about it back then. Courtney’s statements to McMurphy, as well as text messages she handed over to the reporter, would seem to indicate that Meyer did know about the domestic violence accusations years ago and chose not to act on them. Stay tuned.

Meanwhile, Meyer’s former team, the FloridaGators had a crazy week. For starters, several players are facing potential discipline from the university following an incident in May that involved airsoft rifles. The situation is downright bonkers, to say the least. The Gators also said goodbye to freshman Justin Watkins, who is leaving the school after being suspended by coach Dan Mullen because of two arrests over the last three months. He tweeted that he is leaving Florida “to better my opportunities.”

On a brighter note, the Gators added graduate transfer Adam Shuler this week. Shuler is a defensive lineman who will join the Gators from West Virginia. Shuler started 10 games for the Mountaineers last year. He is a nice addition to Florida’s defensive line, which could use a little extra depth heading into the season.

Speaking of transfers, North Carolina announced this week that Ohio State running back transfer Antonio Williams will be eligible to play right away. The NCAA granted him a waiver to play right away after transferring this spring due to a family hardship. Williams garnered just 57 carries as a sophomore with the Buckeyes last season, but he’s a former four-star prospect and could prove helpful to a Tar Heels team coming off a disastrous season.

Just in case you weren’t sure about Nick Saban’s future at Alabama, the university gave him a contract extension this past week that runs through the 2025 season. The deal includes a nice raise that will take Saban’s salary from a measly $7.5 million this season to as much as $10.3 million by the end of the contract. So nice of Alabama to account for inflation over the next several years.

Not Quite As Much

Saban wasn’t the only coach to get an extension this week. New Mexico State head coach Doug Martin received an extension through the 2021 season. In five season at New Mexico State, Martin is 17-44. However, last year he led the Aggies to the Arizona Bowl, their first bowl appearance since 1960. That achievement is undoubtedly worth a new contract. This season, Martin will lead the Aggies as an independent after spending the last four seasons in the Sun Belt.

Tennessee got some good news this week when offensive lineman Trey Smith was cleared to play by doctors after being diagnosed with blood clots in his lungs back in February. Smith is finishing up a six-month treatment of blood-thinning medication and will be held out of contact drills until then. Once he’s off the medication, he will take baby aspirin but will be cleared for full contact. Smith was a top prospect coming out of high school and a Freshman All-American last season, so the Volunteers will be happy to have him back.

We’ll close with the amazing story of Bradley Kim, a defensive back on the Air Force football team. On Friday, Kim became the first openly gay athlete at a service academy. Via an Instagram post, Kim told the world that he’s gay, becoming a trailblazer for the LGTBQ community and the American armed forces.

“I hope that I can serve as an example to those who are allowing their fear of acceptance to change who they are,” Kim wrote on Instagram. “I almost gave up my dream of playing Division I football for fear of not being accepted by everyone, but today I am happy to say that I am a cadet at the Air Force Academy playing the sport I love with amazing people standing behind me and supporting me.”