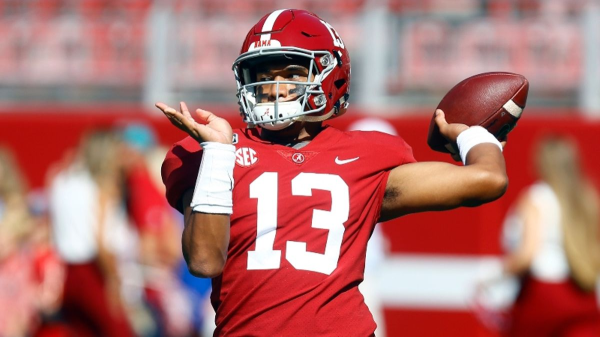 Combined, the LSU Tigers and Alabama Crimson Tide have 16 wins and zero losses this season. With three wins over top-10 teams, LSU can boast the best resume in college football. But when Alabama has its star quarterback under center, it feels unbeatable.

One of these two teams could very well be the best in the country, and we’ll get to see them face off on Saturday afternoon in college football’s biggest game yet.

SEC West supremacy and a direct path to the conference championship game will be on the line in this one, as Joe Burrow and the new-look LSU offense go head to head with Nick Saban’s Alabama squad behind returning quarterback Tua Tagovailoa.

And while a defeat doesn’t necessarily eliminate the loser from College Football Playoff contention, it will almost certainly have them on the outside looking in after this weekend.

Although they’ll be on the road, LSU could be taking one of the best teams it has ever had into Tuscaloosa. The Tigers are ranked No. 2 in the opening College Football Playoff rankings after taking down Texas, Florida, and Auburn, who were all in the top 10 at the time of their losses to LSU.

Sure, we’re used to a dominant Tigers defense. However, we’ve never seen offensive production like this out of the team from the bayou.

Under head coach Ed Orgeron, LSU has put together one of the most explosive offenses in the country. On average, the Tigers are scoring 46.8 points per game on 536 yards of offense.

On top of the best completion percentage in the country at 78.8 percent, Burrow ranks second in the nation with 2,805 yards and 30 touchdowns. Burrow has catapulted up the Heisman and draft rankings largely because he’s done all of the above while tossing just four picks.

While Tagovailoa has become a household name in college football over the past couple of seasons, LSU might have the best quarterback in this contest.

The Crimson Tide have been virtually unbeatable in Tuscaloosa, but they’ll be facing some of their toughest competition here in years. Although they’ve only played one ranked opponent – a 47-28 demolition of then-No. 24 Texas A&M – Alabama is currently ranked No. 3 in the College Football Playoff rankings.

Tagovailoa is coming back from injury just in time for the team’s biggest game of the year. Tua is having another incredible season, with 2,166 yards, 27 TDs, and just two interceptions while completing 74.7 percent of his passes.

The Crimson Tide also have Jerry Jeudy, who’s widely considered to be the best receiver in college football. So far, Jeudy has 52 catches for 682 yards and eight touchdowns on the season.

LSU vs. Alabama By the Odds

With these teams trailing only No. 1 Ohio State in the rankings, Saturday’s big SEC clash is being called the “Game of the Century.” If everyone is playing up to their potential, that could certainly be the case.

With the benefit of home-field advantage, the Crimson Tide are six-point favorites in this game that will put the winner on the fast track to the national playoff.

When you look at the history of these two teams, especially focusing on the previous “Game of the Century” matchup between the two in 2011, two field goals feels like a wide margin for either team to be favored by. In 2011, LSU won a 9-6 contest in which all points came via field goals.

Yet this is a new college football landscape, and these two perennial conference powerhouses have modernized their offenses to the point where scoring five touchdowns a game has become the norm.

And so, with Tua returning to the Alabama starting lineup, the -6 Crimson Tide are favorites in this one.