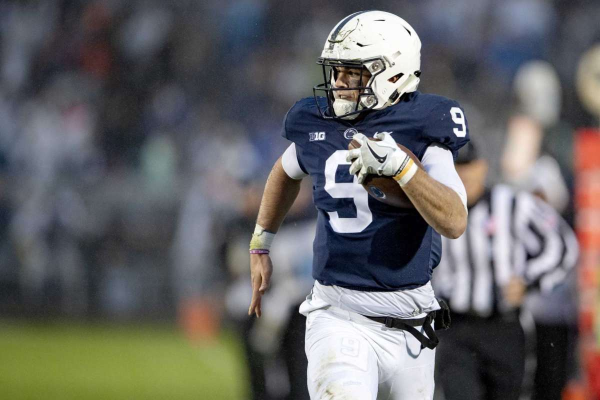 It is a battle of two top-15 teams in the nation on Saturday when the 14th ranked Penn State Nittany Lions (6-2) travel to Michigan Stadium in Ann Arbor to take on the 4th ranked Michigan Wolverines (7-1). For Penn State, they will be trying for their second straight road upset after defeating number 19 Iowa on 30-24 on the road last week. Trying to hold onto that top-15 ranking, Penn State have had some inconsistencies as they held number 8 Ohio State really close, 27-26, in a September loss before following that up with a dud against the Michigan State Spartans, losing 21-17. For Michigan, they are trying to make it their 8th victory in a row since opening week one with a loss to number 3 Notre Dame 24-17. Kickoff is scheduled for this one at 3:45 pm ET Saturday.

The point spread comes in with the Michigan Wolverines as huge 12-point favorites at home. The over/under on total points scored is 53.

Penn State Looking For The Upset

For Penn State, they really do live and die with one player. Quarterback Trace McSorley has really been something special for the Nittany Lions this year. In the air, McSorley is 122 for 231 with 1,628 yards passing, 12 touchdowns and 4 interceptions. While his passing numbers are just seemingly average, he has been a ton on the ground. In 110 attempts, he has rushed for a net gain of 617 yards and 9 touchdowns.

The only person who has rushed more than him is MilesSanders, who has 136 carries for a net gain of 834 yards and 8 touchdowns. On the receiving end, McSorley’s best targets have been K.J. Hamier (27 catches, 497 yards, 5 touchdowns), Juwan Johnson (21 catches, 293 yards, 1 touchdown) and Pat Freiermuth (13 catches, 171 yards and 4 touchdowns).

Defensively, Penn State has been allowing about 22.25 points per game. Statistically, they are led by Micah Parsons (43 tackles), Yetur Gross-Matos (6 sacks for 38 yards lost), Shaka Toney (5 sacks for 40 yards lost) and three players (Nick Scott, Garett Taylor, and Amani Oruwariye) with 3 interceptions each.

One of the impressive things about Michigan is their ability to get it done on both sides of the ball. Defensively, Michigan have the top pass defense in the nation. They are allowing just 122.9 yards per game passing and are in the top 10 in rush defense, allowing 97.1 yards per game. Thus, if Penn State’s Trace McSorley is going to beat them, he is going to have his work cut out for him. Statistically, the defensive leaders are Devin Bush (49 tackles including 4.5 sacks for 30 yards lost), Josh Uche (5 sacks for 29 yards lost), and Josh Metellus (3 interceptions).

While their defense has been stellar, the Wolverines offense is nothing to scoff at either. SheaPatterson leads the team under center and has thrown for 1,523 yards and 12 touchdowns in 123 completions. He also has 3 interceptions to date. On the ground, Patterson has also added 145 net yards and a touchdown. The leading rusher for the Wolverines is Karan Higdon who has 153 carries for a net gain of 831 yards and 6 touchdowns. Through the air, the leading receivers for Michigan are Zach Gentry (23 catches, 332 yards, 1 touchdown), Donovan Peoples-Jones (22 catches, 326 yards, 6 touchdowns) and Nico Collins (21 catches, 320 yards, 2 touchdowns).

Michigan Wins But Fails To Cover

This is a tough one. On paper, I don’t see Michigan losing this one, but Penn State has a knack for playing teams close. All four of Penn State’s last games have been decided by 6 points or less, including games against Ohio State and Iowa. Ultimately, I do see Michigan winning the game outright, but for my money, I am going to take Penn State and the 12 points.