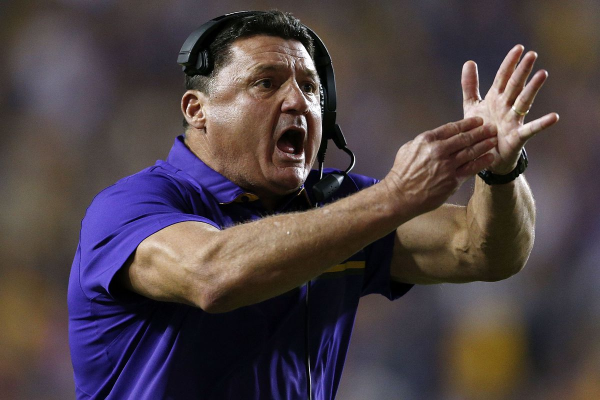 Games don’t come a whole lot bigger than this one. On Saturday, number one Alabama Crimson Tide (8-0) will travel to Tiger Stadium-LSU in Death Valley to take on the number three LSU Tigers (7-1). For Alabama, they have the opportunity to make another statement that they are undoubtedly the best team in the country while LSU is looking to shock the world by upsetting Alabama.

For LSU, they are also hoping to remain in the National Championship scene as a second los could highly dampen their chances. Kickoff for Saturday night’s contest is at 8:00 pm ET.

For Alabama, they have been dominant on both sides of the ball. The lead the nation in scoring a they are averaging 54.1 points per game. They aren’t too shabby on the defensive side, either. In fact, they are giving up 15.9 points per game, which ranks them 10th overall for fewest points allowed. To add to the repertoire, they also have the leading Heisman hopeful in quarterback Tua Tagovailoa.

For LSU, they are hoping their defense might be able to slow down the Crimson Tide. They are averaging 15.1 points, which is good for 7th fewest in the nation. The defensive backs are especially good for the Tigers as they lead the nation with 14 interceptions. As good as they have been, it would be a major upset if LSU can pull it off, but they fared well against ranked opponents as they have beaten both Mississippi State (ranked 22nd at the time) and Georgia (ranked 2nd at the time) this season, both at home.

The point spread comes in with the Alabama Crimson Tide as huge 14.5-point favorites on the road. The over/under on total points scored is 53.5.

Alabama has been dominant in all facets of the game, but their offense just looks downright special. Under center is quarterback Tua Tagovailoa. On the season, he is 107 for 152 with 2,066 yards, 25 touchdowns and no interceptions. Yes, that is right, no interceptions. That may be one of the biggest things to watch Friday as he is going against the leading interception team in the nation.

For Tagovailoa, his best receivers this year have been Jerry Jeudy (31 catches, 777 yards, 10 touchdowns and Henry Ruggs III (24 catches, 444 yards, 7 touchdowns). Crazily, he has three other receivers who all have 380 or more yards receiving and 3 or more touchdowns each.

On the defensive side, Deionte Thompson leads the way in tackles with 46. Isaiah Buggs (8) and Christian Miller (5.5) lead the way in sacks and Saivion Smith leads the team with 3 interceptions.

LSU Needs Players To Play Big For Chance To Win

For the LSU Tigers, they will look to Joe Burrow to try to upset the Crimson Tide as he will take the snaps under center. On the season, Burrow is 120 for 223 with 1,544 yards passing, 6 touchdowns and 3 interceptions. For Burrow, his best receivers this year have been Justin Jefferson (30 catches, 471 yards, 2 touchdowns), Stephen Sullivan (15 catches, 184 yards, 1 touchdown) and Dee Anderson (15 catches, 183 yards).

Slightly different than Alabama, they rely more on their run game to generate offense. On the ground, Nick Brossette leads the way with 151 carries for 697 yards and 10 touchdowns. Clyde Edwards-Helaire isn’t too far behind with 105 carries for 521 yards and 5 touchdowns. Quarterback JoeBurrow has also gotten in on the action going for 250 yards and 4 touchdowns on 67 carries.

Defensively, DevinWhite leads the team with 76 tackles, including 7 for a loss. Grant Delpit and Michael Divinity Jr. are tied in sacks with 4 apiece. Lastly, Grant Delpit (5) and John Battle (3) lead the team in interceptions.

It is hard to bet against Alabama. They are a flawless unit that is strong in just about every facet of the game. While I expect the Crimson Tide to win, I do think that LSU will keep it relatively close, or at least a little lower scoring. As a result, I think they keep it within a couple touchdowns. Alabama is a ton, but 14.5 points is a lot to spot the 3rd ranked team in the nation. I am taking LSU getting the 14.5 points.