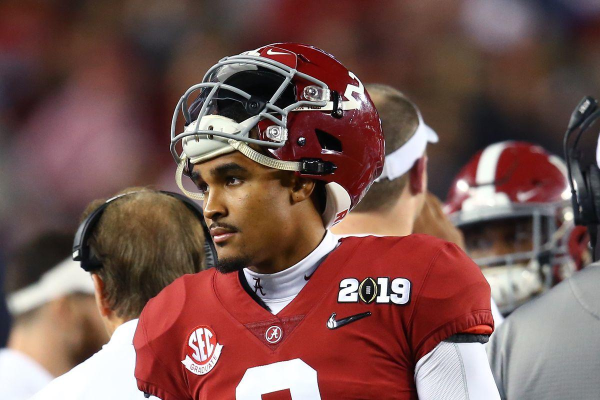 Over the last week, the college football world has essentially been one giant game of quarterback musical chairs. Let’s recap where everyone landed and check out any other important news from the past week.

Beat Them, Then Join Them

The biggest decision of the week came from former Alabama quarterback Jalen Hurts, who announced he’ll be transferring to Oklahoma next season. Hurts graduated from Alabama next month, meaning he’ll be eligible to play right away. With the last two Oklahoma quarterbacks winning the Heisman, Hurts has some big shoes to fill. Of course, he also had a 26-2 record as the starter at Alabama. He should ensure that the Sooners are once again Big 12 favorites in 2019.

You Can’t Fire Me, I Quit

With Hurts going to Oklahoma, Austin Kendall is heading to West Virginia. Kendall served as Oklahoma’s backup this past season and was in line to be the starter next season. However, when the Sooners pursued Hurts, he decided to explore his options, especially after earning his degree, meaning he will be eligible to play right away. Oklahoma initially tried to block the move, but they won’t do so now that they have Hurts. Kendall will look to fill the shoes of Will Grier. However, both Jack Allison and Trey Lowe III could push Kendall for the starting job.

Taking My Talents to South Beach

Upset at former Georgia quarterback Justin Fields transferring to Ohio State, Tate Martell has left the Buckeyes and will transfer to Miami. Martell served as the backup to Dwayne Haskins this past season and seemed personally insulted that the Buckeyes pursued Fields. However, he will likely have to sit out a year before becoming eligible in 2020. That could give rising sophomore N’Kosi Perry a chance to lock down the starting job despite failing to do so when given a chance in 2018.

Former Notre Dame quarterback Brandon Wimbush will spend his final season of eligibility at Central Florida. Wimbush was the starter for the 2017 season and early in 2018 before being benched in favor of Ian Book despite the Irish being undefeated. UCF is holding out hope that McKenzie Milton can return from the devastating injury he suffered late in the season. However, he’s likely to miss the 2019 season, opening the door for Wimbush to become the starter. Of course, Darriel Mack Jr., who started in place of Milton late in the season, could push Wimbush for the job.

Reunited and it Feels So Good

After a record-setting career at SMU, Ben Hicks will transfer to Arkansas for his final year of eligibility in 2019. Arkansas head coach Chad Morris spent three seasons as the head coach at SMU from 2015 to 2017, so Hicks will immediately be comfortable with the Arkansas coaching staff and the scheme the Razorbacks run. Ty Storey and Cole Kelley, the two quarterbacks who took most of the snaps for Arkansas in 2018, have both announced that they’ll be transferring, meaning Hicks will likely be the Arkansas starter in 2019 as they look to improve on last season’s 2-10 campaign.

After initially deciding to transfer to UTEP, former Kansas State player Alex Delton has changed his mind and will instead head to TCU. Delton has played a lot of football for the Wildcats over the past two seasons but hasn’t been able to secure the starting job full-time. At TCU, Delton will be eligible right away and will have a chance to win the starting job with Michael Collins recovering from a leg injury that ended his season in November.

The coaching carousel seems to have finally come to an end. After having head coach Rod Carey poached by Temple, Northern Illinois has hired Thomas Hammock as their new head coach. The 37-year old Hammock was a running back at NIU before a heart condition cut his playing career short. He’s spent the last five seasons as the Baltimore Ravens running backs coach. However, he was an assistant at the college level for 11 years prior to that. This will be his first job as a head coach.

The college coach most deserving of a contract extension has received one. Army has signed Jeff Monken to an extension that will keep him at West Point through the 2024 season. After going 6-18 in his first two seasons, Monken has led the Black Knights to three straight bowl games and back-to-back seasons of 10 or more wins for the first time in program history. Army finished the 2018 season 11-2 and ranked 20th in the coaches poll.

Tonight’s NBA betting schedule is lacking in overly compelling matchups, but tonight’s action will also be taking place with a few notable names missing. Booker, Morant, and Lillard Sidelined Tonight and Beyond Booker Out Versus Pistons Due to Hamstring Injury The Phoenix Suns lost Devin Booker (hamstring) on Tuesday against Golden State but closed out END_OF_DOCUMENT_TOKEN_TO_BE_REPLACED