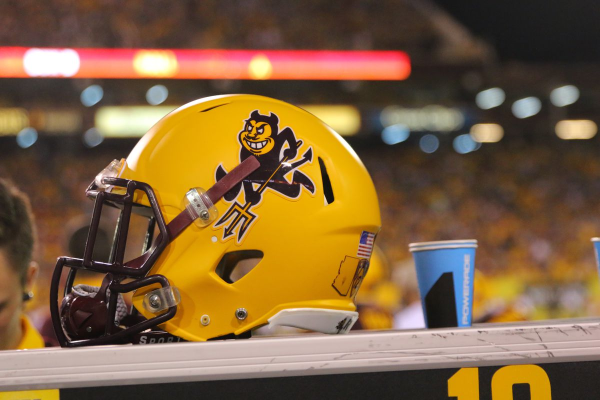 This game is going to be a battle. Michigan State squeaked out a nail-biter last week against Utah State, 38-31. MSU were favorites and it wasn’t supposed to be this close but the up-tempo style of USU really forced MSU to make some mistakes on defense that they usually would not make. Arizona State, on the other hand, easily handled UTSA in Herm Edwards ASU coaching debut taking the game, 49-7.

Spartas Looking to Bounce Back After Week 1 Struggles

Michigan State struggles early in the game were evident as they struggled to keep up with the offense of Utah State. Not many teams are going to be able to run the kind of offense that they saw, but one thing is for certain, if they see it again they will be ready for it.

Offensively, Michigan State struggled a little bit only throwing up 452 yards of offense. They expected more against a team like Utah State. They were very balanced throwing for 287 yards and rushing for 165. Defensively they gave up just 25 rushing yards but allowed 319 through the air.

This is a team that will struggle against spread offensive teams that throw the ball. Junior Brian Lewerke heads the offense and coming into his second season of starting he threw for 287 yards and two touchdowns against one pick. They will need him to repeat that performance or give a better one if they look to win this game.

Edwards Looking to Get the Sun Devils Rolling

Arizona State is a very underrated team.  Of course, they are led by legendary head coach Herm Edwards. They can stop the run and the pass. Against UTSA, their defense was swarming, but then again you must remember it was UTSA. They only allowed three yards rushing on 33 carries and only gave up 218 yards passing.

Their defense was unstoppable and their offense was very solid as well. Senior MannyWilkins heads the offense and had a solid game going 16-of-24 and throwing for 237 yards. While those aren’t gaudy numbers, he did throw four touchdowns as well. They gouged UTSA on the ground piling up 266 yards. Almost half of that came by sophomore Eno Benjamin who had 131 yards on just 16 carries.

The balanced offensive attack and suffocating defense led to their big win over UTSA. This is going to have to be something that ASU continues to do throughout the season in order to give Edwards a little bit of room for error.

This week will test both teams. MichiganState struggled running the ball last week and Arizona State stopped the run very well. MichiganState struggled to stop the spread offense of Utah State and Arizona State runs the spread offense. Both teams have weaknesses coming in that they must work on to be able to compete in their respective conferences and this game will be a test.

Look for the Spartans coming out slow since it’s a 10:45 start on the west coast but then in the second half hitting their groove and start clicking with what they are trying to do with the ball. The line is MSU -6, but look for Arizona State to cover that and make it a close game. The stars line up for this to be an instant classic in Tempe.