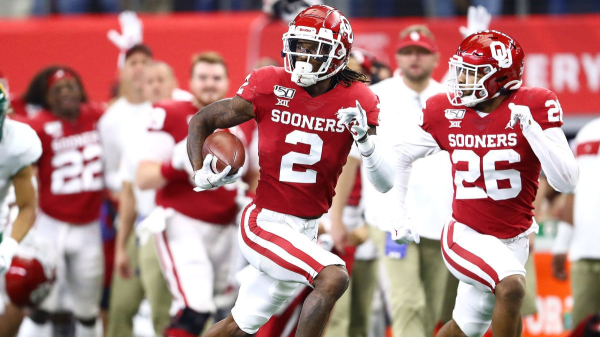 In the heart of bowl season, the College Football Playoff will take place. The first game is in Atlanta and features the top-ranked team in the nation against a team that is ready for an upset. No. 1 LSU will take on No. 4 Oklahoma in the first of two semifinal matchups Saturday.

Here is a preview for Saturday’s Peach Bowl, along with odds and a free pick.

It was a year to remember for Ed Orgeron’s LSU Tigers. They have a perfect 13-0 record and a first-place finish in the SEC, highlighted by wins over Florida, Auburn, Alabama and Georgia.

The Tigers averaged 47.8 points per game this season, all while allowing just 21.2 per game. They also gained 554 yards compared to the 341 that they gave up.

Of course, LSU is led by this year’s Heisman Trophy winner, Joe Burrow. The star quarterback put up spectacular numbers, throwing for 4,715 yards and 48 touchdowns.

Burrow has formed strong connections with receivers Ja’Marr Chase and Justin Jefferson. Chase has nearly 1,500 receiving yards and 18 touchdowns, while Jefferson has over 1,200 yards and 14 touchdowns.

LSU also has running back Clyde Edwards-Helaire, but he, along with backup Tyrion Davis-Price, is questionable to play. On defense, freshman cornerback Derek Stingley Jr. has six interceptions, while safety JaCoby Stevens has five sacks.

Lincoln Riley’s Oklahoma Sooners are the only team in the Playoff with a loss, entering the game with a 12-1 record and a first-place finish in the Big 12. Despite the loss to Kansas State, the Sooners defeated Texas, Oklahoma State, and Baylor twice, including in the thrilling conference championship game.

The Sooners are led by quarterback Jalen Hurts. The former Alabama QB threw for 3,634 yards and 32 touchdowns and ran for 18 touchdowns with 1,255 yards.

Behind Hurts, Oklahoma’s second-leading rusher is running back Kennedy Brooks, who has 876 yards and five touchdowns. Hurts’ favorite weapon is potential NFL first-round draft pick, CeeDee Lamb. The star receiver has 1,208 yards and 14 touchdowns on 58 catches.

On defense, the Sooners have standouts like linebacker Kenneth Murray, who had 16 tackles for loss, and defensive lineman Ronnie Perkins. However, Perkins is suspended along with two other players for an undisclosed reason, paving the way for freshman Jalen Redmond to take over in his absence.

LSU will win if: Burrow does his thing. Under passing game coordinator Joe Brady, LSU set a school record in points per game, led the nation in total offense, and was second in overall passing offense.

It’s a dynamic offense that revolves around the potential No. 1 overall pick in next spring’s NFL Draft, Burrow, so if he has a good game, it’s likely LSU will be in good shape.

Oklahoma will win if: Its defense builds off of recent success. In the Big 12 title game against Baylor, the Sooners held the Bears to 265 total yards and just eight first downs for the whole game. In reality, their defense has been fairly solid all season, leading the conference in total defense.

It’s the first time in 23 years Oklahoma led the Big 12 in both total offense and defense, showing that it’s very well-rounded, but against the nation’s top offense, the defense will have to be better than ever.

The Fiesta Bowl opened up with LSU as the big favorite at -12. But over the last couple of weeks, momentum has shifted even more in favor of the Tigers, with the betting line now listed at -13.5.

This game will likely be high-scoring, with two of the top offensive teams in the nation. However, LSU has the edge on offense, proving its dominance against a much tougher schedule.

That, along with the key defensive players out for Oklahoma and its mediocre red-zone defense with them on the field, give the Tigers the edge. I’m picking LSU -13.5 to advance to the national championship game.