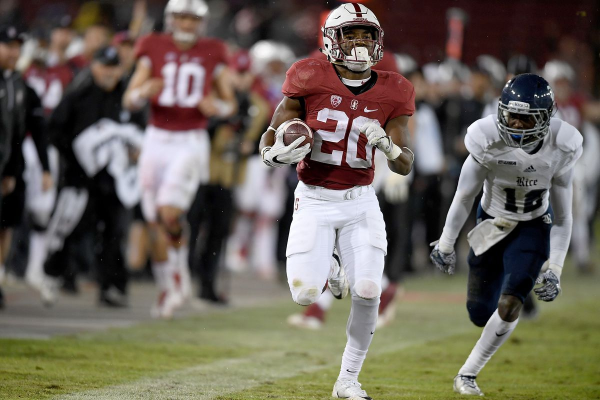 In a rematch of the 2017 PAC-12 Championship, #17 USC heads to face off with #10 Stanford. USC won both games last year, including the PAC-12 Championship and Stanford looks to reverse that trend with a win at home. The likely matchup in the championship game at the end of the season is looming, but first both teams must focus on their second game of the year. Both teams weren’t really tested in their openers, but now with a Top-25 match-up they will have to bring their best. Stanford is listed -5.5.

Trojans Looking for Life Without Darnold

USC is without their star quarterback as Sam Darnold has moved on to the NFL, but JT Daniels stepped right in and filled the void. The true freshman quarterback showed out in that 43-21 win over UNLV. Daniels threw for 282 yards on 22-of-35 passing. He included one touchdown throw to fellow freshman Amon-Ra St. Brown. St. Brown led the team with seven receptions for 98 yards.

On the ground, senior Aca’Cedric Ware pummeled UNLV with 100 yards on just 10 carries. He had a long run of 22 yards, which shows you just how consistently he was picking up chunks of yards. USC as a whole piled up 501 yards of offense and they will need all of those yards to beat Stanford. One question mark going into the game is the defense as they allowed 405 yards to a UNLV team that went 5-7 last year.

USC allowed less than 100 yards passing but really struggled to contain the run letting UNLV run for over 300 yards in their loss. USC couldn’t put them away until the second half.

With BryceLove returning as one of the best backs in college football, you could have expected Stanford to let him run loose. He didn’t, but junior quarterback K.J. Costello dazzled while throwing for 332 yards and four touchdowns. His favorite receiver in their first game was JJ Arcega-Whiteside as the senior put up some gaudy numbers. Whiteside finished the game with six catches for 226 yards and three touchdowns.

For some that is a career night, for Whiteside its just another game. Love is the featured back after running for 2118 yards last year but San Diego State contained him really well only allowing him 29 yards on 18 carries. Stanford only mustered 50 yards of rushing on the night but with a passing attack like they have, it is okay for Love to have an off game once or twice a year.

San Diego State is an excellent team and Stanford’s defense played them well, their defense is what they can hang their hats on at the end of the day.

This is going to be a dogfight no matter how you look at it. USC could put eight guys in the box to try to stop Love, but then Costello will beat you deep. I look for USC to play the passing game more than the run game and Love with run all over the defense. Stanford really needs to make sure they don’t relax with a freshman starting at quarterback for USC. Daniels is raw but he can make throws all over the field.

USC stopped the run last week, but they weren’t up against one of the best running backs in college football. I think USC will start slow as they are accustomed to doing and Stanford will gain an early lead then use their rushing attack to wear USC down.

Daniels hasn’t been in this spot before and I don’t think he has what it takes to lead a team from behind yet. Look for Stanford to gain a 7-10 point lead at the half and grind out the second half. Bet Stanford -5.5 over USC.