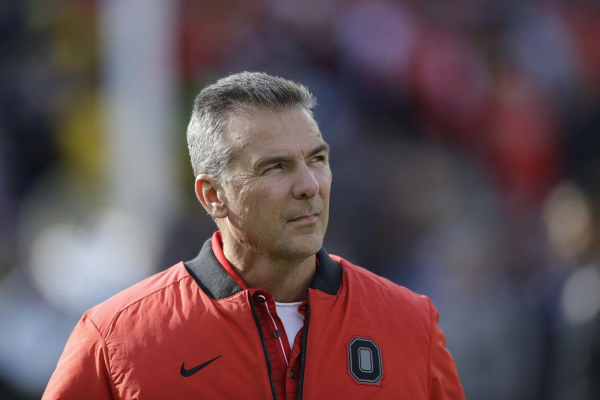 We are just a few days away from the start of the college football season, as there are a few games on tap this weekend. That means there’s a lot going on over the past week, most notably teams with an ongoing quarterback battle announcing their starter for the season, among other stories. Let’s check out the top headlines from the past week.

We start, of course, with Wednesday night’s announcement that Urban Meyer will be suspended for Ohio State’s first three games of the season following an investigation into what he knew and when about domestic assault allegations against former assistant Zach Smith. He will be away from the team until September 2 and miss games against Oregon State, Rutgers, and TCU. The school’s investigation concluded that Meyer didn’t cover up the allegations, even if he didn’t act on them appropriately. Ultimately, being suspended for three games is a meaningless penalty, serving little to no justice in Meyer’s role in not coming forward about allegations of domestic violence.

The Minnesota Golden Gophers, a Big 10 team mind you, have decided to start a true freshman in their season opener. Not only that but true freshman Zack Annexstad is actually a walk-on. The only scholarship quarterback on Minnesota’s roster is redshirt freshman Tanner Morgan. However, Annexstad beat out Morgan for the starting job and will make his debut against New Mexico State next weekend. In fairness to Annexstad, he had interest from FBS schools, including a scholarship offer from Cincinnati. However, he chose to walk-on at Minnesota where his father played.

The Favorite All Along

Jim Harbaugh has finally put an end to what was a crowded Michigan quarterback competition by naming Ole Miss transfer Shea Patterson the started for the season opener against Notre Dame. Patterson was the favorite all along after receiving a waiver to be eligible right away. He opened last year as the starter at Ole Miss before suffering a season-ending injury midway through the season. After struggling to find a long-term starter last season, the Wolverines hope Patterson can bring some stability to the quarterback position.

The One True Longhorn

Texas appears to have decided on Sam Ehlinger as their starting quarterback for the season opener against Maryland. Head coach TomHerman said it will being Ehlinger barring something unforeseen. Ehlinger and Shane Buechele both saw meaningful action last season, but it was Ehlinger, a slightly better runner, who ended up beating out Buechele in training camp. Of course, knowing Buechele has experience as a starter could mean Ehlinger has a shorter leash than most quarterbacks.

Kyler Murray has been projected as Oklahoma’s quarterback this season all along, and now it’s finally official. Head coach Lincoln Riley announced Wednesday that Murray had beaten out sophomore Austin Kendall. It’s expected that Murray will leave Oklahoma after the season to pursue his baseball career after he was a top-10 pick of the Oakland A’s earlier this summer. That means he’ll get only one season to lead the Sooners to a title.

Alabama has been a frequent victim of the injury bug throughout training camp. On the heels of another couple of players going down, Nick Saban had some interesting comments about his team’s depth. Saban told the media “you just think we just, whatever happens, we just shit another player and everything is going to be perfect. All of our fans think that. You all think that.” For what it’s worth, Alabama has had the top-ranked recruiting class in the country nearly every year Saban has been at the school. If Saban’s looking for sympathy, he’s sorely mistaking.

The Wisconsin Badgers are starting to look a little short-handed at the wide receiver position. Quintez Cephus, the team’s second-leading receiver last year, announced he’s taking a break from the team just before he was charged with sexually assaulting two women in an incident that took place in April. His roommate and fellow wide receiver Danny Davis was mentioned in the criminal complaint, and as a result, head coach Paul Chryst has suspended him for the first two games of the season. Davis has not been charged with anything, but Chryst still felt it was appropriate to punish him.

We’ll close with some good news. Colorado State head coach Mike Bobo has been released from the hospital after being treated for numbness in his feet. He will likely coach his team from the coaches booth in their season opener Saturday against Hawaii.