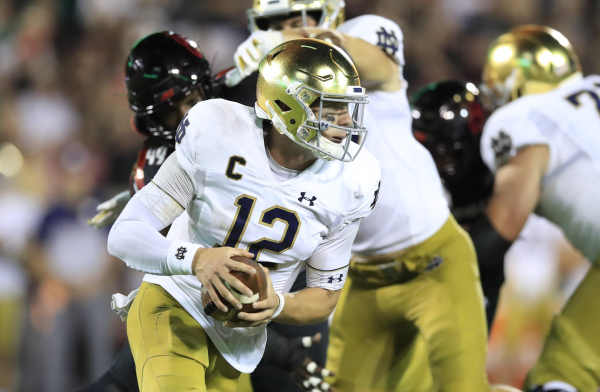 No. 7 Notre Dame is traveling to Athens, Ga., to take on the No. 3-ranked Georgia Bulldogs in what could be the most important non-conference game of the season. We saw Auburn vs. Oregon and LSU vs. Texas captivate the sports world while they were the game of the week, and I expect something similar in this one.

The Biggest Game of the Year

This game is so important for the landscape of college football because this is very possibly the toughest game of the year for both teams. Notre Dame has a few tough opponents on the schedule like a USC team that is one of the most talented in the country and a Michigan team that has struggled early on. Georgia has three more opponents ranked in the top 20, including road games with Florida and Auburn, but I believe that these are two of the most overrated teams in the country.

Maybe Notre Dame is another overrated team on Georgia’s schedule, as the line of -14 in favor of the Bulldogs would suggest. 247Sports has something called team talent composite rankings, which is a measure of just how talented the team is based on their recruiting rankings. Georgia is among Alabama and Ohio State, who have separated themselves from the rest of college football from a talent perspective, and Notre Dame is all the way at No. 14.

Notre Dame has 46 4-star recruits, while Georgia has 45. The issue for the Fighting Irish is that the Bulldogs have 14 5-star recruits on the roster while Notre Dame has just one named Tommy Kraemer, who is their starting right guard. The question in this game is will Georgia take advantage of their talent and can Notre Dame avoid being overpowered due to this talent gap.

Notre Dame has struggled against this elite tier in recent history, most notably the blowout losses to Alabama and Clemson in recent major bowl games. In fairness, Notre Dame is a different team than that 2012 team and Alabama got crushed by Clemson just a week after ND’s blowout loss.

I expect this matchup to be very close and intriguing throughout the game. Ian Book is a solid quarterback, but he is not someone that has the elite talent to carry his team to a huge win. Book will need help from his offensive line and specifically Chase Claypool if he wants to have a big game.

Claypool is the best receiver on this team, and Georgia could be without their most physical corner, Tyson Campbell, in this game. If Campbell is out, I expect Claypool to have a big game as a really physical receiver.

Georgia has more defensive talent on the field than Notre Dame has offensive, but I think that Notre Dame has a good enough offensive line to make this matchup seem close throughout the game. This means it will be up to Book to make plays, which is something that he has been practicing in the offseason.

There were reports that he was encouraged to make more plays downfield in practice and not worry about interceptions in practice to gain what would basically be more upside in his game.

This is the key to the game for multiple reasons. Can Notre Dame’s average run-stopping unit stop one of, if not the best running teams in the country with an elite offensive line and one of the most talented backs in the country?

For Georgia, the question is about their offensive scheme and how they plan to attack this game. In the last two seasons, I have watched Georgia and made fun of their lack of decent play-calling on a week-to-week basis. However, in their games against Alabama, they have run a much more aggressive and explosive offense until they get the lead and go back into their shell.

In every other big game, they have been a very bland offense, like what we saw against Texas in their bowl game last year. Will Georgia treat this like the Super Bowl that is the SEC Championship Game or will they treat this game plan like they have for most of Kirby Smart’s tenure?

You would think that they understand that this is their biggest statement game of the season, but I am not counting on a dynamic Georgia offense to show up on Saturday night.

I expect the Bulldogs to pull away from ND late due to their physicality, but this may come after the Fighting Irish have a lead early. I’ll take Notre Dame +14 here, but I like the Bulldogs in this one 31-21.