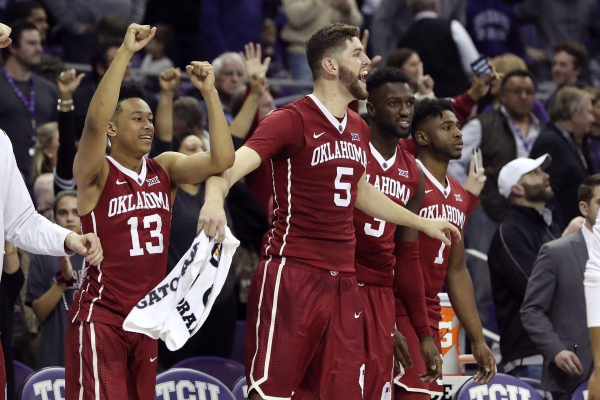 The 9th seeded Oklahoma Sooners are taking on the 1 seed VirginiaCavaliers in Columbia, SC Sunday at 7:45 EST on TRUtv. Obviously, both of these teams are coming in on wins, but they were very different wins, which makes this game a lot more intriguing to me. Oklahoma came in and blew the doors off of Ole Miss for every single second of that game. This did not look like the Oklahoma team I watched this season and I expect that momentum to be a key for the Sooners. Virginia beat Gardner-Webb by 15, but it was not comfortable, as they trailed most of the first half. This happens from time to time with the top teams, but with what happened last year, the Cavaliers must have been incredibly stressed out at the half.

The biggest thing that went right for the Sooners in their first game was clearly their scoring. This team was an average to a below-average scoring team when it came to basically all categories whether that is EFG%, 3-pt%, FT%, they rank anywhere from 150-200th in the country. Last game, they shot 46% from 3 and 20-23 from the free throw line. They didn’t have one player miss more than one free throw when their best free throw shooter doesn’t even shoot 80%. This performance was clearly an anomaly, but it could instill confidence in this team, especially if they can get shots to drop early in this game.

Oklahoma was also really good at exploiting mismatches in their first game and these will not be as prevalent in this spot vs. a much more sound Virginia team. That being said, they are one of the best teams I have watched at getting the ball to where it needs to be when a mismatch does occur. Kristian Doolittle has been great for OU down the stretch of the season and that definitely didn’t stop last game. Doolittle was pretty clearly the best player on the court and he will need to pop in this game for Oklahoma to have a shot. Doolittle plays really hard and looks a lot bigger than 6’7 on the court, which could be an advantage against a Virginia team that does not have a great post presence.

Virginia possesses the 4th best 3-point shooting percentage of all college programs and this is one of the things that makes them so lethal, but we have seen them go cold much more than normal in the tournament and I have no reason for this. I don’t think there is really a reason, but it’s not comforting and I think a lot of it has to do with the style of play. This is the slowest team in the country and they are not comfortable coming back in games. The only good part about their last showing is that they did take control of that game at some point, which they obviously have struggled to do in the past.

This line is simply too big for my liking and really against my better judgment. On the surface, this is a well-oiled machine in Virginia that rolls over mediocre teams like Oklahoma that can’t shoot that well and can’t defend that well. I think that this game is all about how Oklahoma comes out because I think everyone playing Virginia comes out thinking they can win the game, as crazy as that seems. If Oklahoma can knock down a few shots, I think we see Oklahoma play with a similar swagger that they played with vs. Ole Miss, which would be a problem for the Cavaliers. 11 is too big for an athletic team riding some momentum in a game that would likely be really slow if they do get beaten handily. I think there are too many ways for the Sooners to cover to not take them +11 here.