NCAA Football: Plenty to Discuss as Week 3 Comes to an End 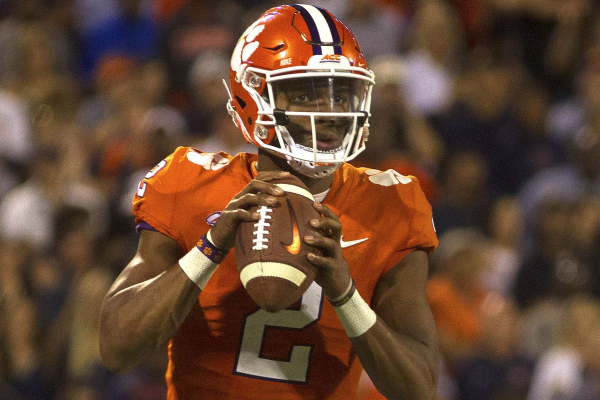 With the third week of the college football season, things are finally getting kicked into high gear. We had a couple of top-10 upsets over the weekend, as well as plenty of other interesting action. Let’s catch up on all the highlights of the past week.

One of the top-10 teams to lose this week was Auburn, who led LSU 21-10 midway through the 3rd quarter. However, the Bayou Bengals managed to forge a comeback behind quarterback Joe Burrow. LSU eventually kicked a game-winning field goal as the clock expired to win 22-21. Ed Orgeron’s Tigers have leaped to no. 6 in the polls. With wins over Miami and Auburn, LSU undoubtedly has the best resume in college football through three weeks.

Wisconsin was also the victim of an upset on Saturday, falling to BYU 24-21. Wisconsin was the better team statistically, but they struggled to finish off drives. They have dropped substantially in the polls and now face an uphill battle to reach the College Football Playoff. However, with both Michigan and Penn State on their schedule, if the Badgers can run the table and then win the Big Ten title game, they may be able to sneak in with one loss. But that won’t happen if they keep playing the way they did against BYU.

In addition to Wisconsin’s loss, six other BigTen teams lost on Saturday, with four of them losing to non-power-conference teams. Let’s do this lightning-round style:

Rutgers lost bad (55-14 bad) to a Kansas team that was the laughing stock of college football just a couple weeks ago after losing to an FCS school.
Maryland, who if you remember beat Texas earlier this year, lost to Temple 35-14. This was Temple’s first win of the season after losing at home to both Villanova and Buffalo.
Nebraska suffered a 24-19 loss to Troy, as the Scott Frost era has started 0-2. To be fair, Troy is one of the favorites in the Sun Belt, but that loss still won’t go down well in Lincoln.
Illinois lost at home to South Florida 25-19, although that wasn’t exactly an upset.
Purdue lost a shootout against Missouri 40-37. The Boilermakers looked good offensively but still fall to 0-3 on the season, giving them long-shot odds of getting back to a bowl game this year.
Northwestern had the most shocking loss, falling to Akron at home 39-34 after the Zips scored three defensive touchdowns. Losing to Duke last week is one thing, but getting beat by a MAC team is a new kind of low for Pat Fitzgerald’s Wildcats.

If it wasn’t bad enough losing to Texas and falling to 1-2 on the season, USC lost kicker Chase McGrath for the season because of a torn ACL. McGrath suffered the injury while trying to make a tackle following a blocked field goal. The silver lining is that because of the new redshirt rules, McGrath will be able to get the year of eligibility back since he obviously hasn’t played in more than four games this year. In the meantime, Michael Brown will take over the kicking duties. Brown, ironically, missed most of last season because of a torn ACL.

Ohio State picked up a big win over TCU over the weekend, but they may have lost defensive end Nick Bosa to injury in the process. Bosa left the game with a lower abdominal strain in the third quarter. After going to the locker room, he returned to the sidelines in street clothes. There’s no word yet on his status, but Bosa would be a significant loss for the Buckeyes if he ends up missing an extended period of time.

No Quarterback Quandary… Yet

Dabo Swinney won’t say there’s a quarterback controversy at Clemson, but we might be close to getting one. Starter Kelly Bryant left Saturday’s win over Georgia Southern with a chest bruise. Swinney says Bryant will be good to go this week against Georgia Tech. However, Bryant threw for just 68 yards and an interception before being forced to leave the game late in the 1st quarter. At that point, the game was still scoreless.

The Tigers didn’t get it going offensively until backup Trevor Lawrence came in, ultimately leading Clemson to a 38-7 win. Bryant will start this week, but the gap between him and Lawrence may have closed a little over the weekend.