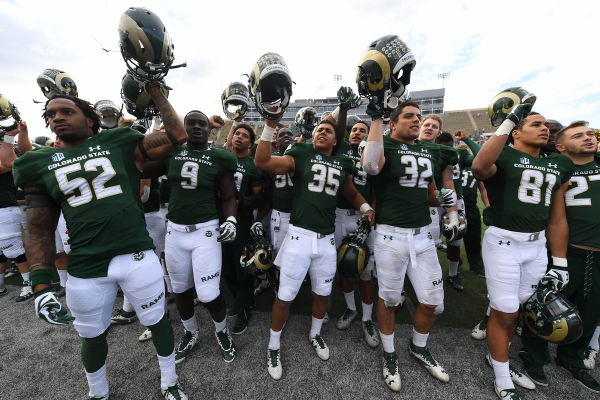 The Mountain West Conference will be on display Friday night when the Colorado State Rams (3-4) travel to Albertsons Stadium to take on the 4-2 Boise State Broncos. Even though they are both 2-1 in the conference, many do not expect this to be a close game at all. In fact, the spread for this one comes in with Boise State as 23.5-point favorites at home.

Still, Colorado State, coming off of wins over New Mexico and San Jose State will look to make it three in a row while Boise State, coached by Bryan Harsin, will try to make it two in a row as they chase the first place Utah State in the Mountain West. Kickoff is scheduled for 9:00 pm ET.

At 3-4 on the season, Colorado State certainly has not played very good football, especially when you consider that they have only scored 172 points compared to allowing 246 on the season. Still, at 2-1 in the conference, they shockingly sit on the doorstep of the conference lead as they, Boise State and Utah State all sit close to one another.
Colorado State is led by quarterback K.J. Carta-Samuels.

He has 158 completions for 1,934 yards, 16 touchdowns and 6 interceptions. His leading receivers have been Preston Williams (52 receptions, 671 yards, 7 touchdowns) and OlabisiJohnson (36 receptions, 533 yards, 4 touchdowns). On the ground, Izzy Matthews has led the way with 425 net yards on 109 attempts with 2 touchdowns. Still, their offense is scoring just 24.57 points per game, averaging 298 yards through the air and 113 yards on the ground.

The bigger issue for the Rams has been their defense. Compared to the 24.57 points their offense has been scoring, the Rams’ defense has been giving up an average of 35.14 points per game. The biggest issue has been stopping the run. While opponents are averaging 242 yards per game in the air, the Rams have been giving up a whopping 203 yards on the ground. Against a pretty good Boise State offense, that could spell trouble for Colorado State.

Boise State Looking To Move To 3-1 In The Conference

Boise State is led under center by quarterback Brett Rypien. On the season, he is 157 for 233 with 1,858 yards passing, 14 touchdowns and 5 interceptions. One of his biggest problems, though, is that 12 of those touchdowns came in the first four games, while in his last two he only has two touchdowns and all five of the interceptions.

On the defensive side, KekoaNawahine leads the team with 34 tackles, while Durant Miles leads the team in sacks (4.5) and three players are tied with one interception apiece.

Boise State Wins, But Can They Cover?

I think there is very little doubt that BoiseState wins this matchup straight up, but from a betting stand point the spread is a little tougher to gauge. Generally speaking, BoiseState is a lot better than Colorado State, but 23.5 points is a big pill to swallow if you are going to bet Boise State on the spread. Their quarterback has been shaky at best lately and their defense is not the superior unit that many anticipated before the season.

Also, don’t forget that Colorado State has a knack for playing them tough (Colorado State actually had a 28-3 lead last year against Boise State before ultimately blowing it). With all that in mind, I just can’t get myself to bet Broncos in this one. Take Colorado State and the 23.5 points.