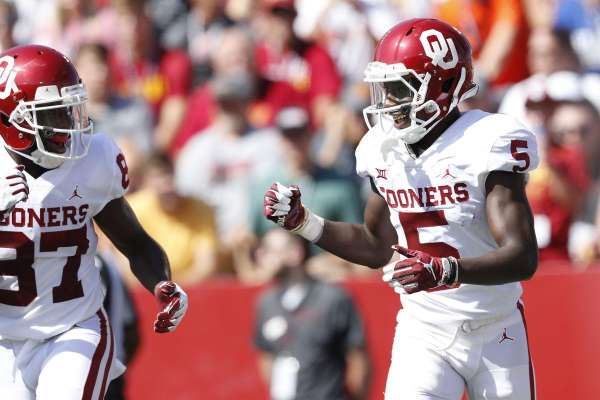 One of the biggest rivalries in the Big 12 is the Oklahoma State Cowboys and the Oklahoma Sooners matchup. This game takes place on Saturday and it also has the potential to be one of the most lopsided conference games of the weekend. Oklahoma comes into this one ranked sixth in the nation with a record of 8-1 on the year. Their only loss came at the hands of Texas four weeks ago. Oklahoma State has not been as fortunate this year as they sit at 5-4 this season. They did beat Texas two weeks ago but since fell to Baylor. They are a team that just isn’t able to stop opposing defenses. The Sooners are heavily favored in this one by 20.5 points.

The Cowboys come into this game as a team that scores 38.3 points per game and gains 497.3 yards of offense per game. They are pretty balanced as they get 297.2 of those yards through the air and also get 200.1 yards per game on the ground. This is a team that is really going to end up relying on their defense for most of the game, something that isn’t a great asset to the team this year. Oklahoma State allows 396.3 yards per game using their first-string defense for most of the game. They allow opposing teams to score 29.9 points a game. Taylor Cornelius is the leading passer for the squad throwing for 2,632 yards on the season thus far. He has also thrown 20 touchdowns but has thrown eight balls to the other team. Justice Hill is the team’s leading rusher with 895 yards on the ground. He has gotten across the goal line on eight occasions. The leading receiver for the Cowboys is Tylan Wallace. Wallace has caught 58 passes for 1,062 yards and seven touchdowns.

The Sooners have been operating this year as a well-oiled machine. They have been scoring points and scoring a ton of them. The offense is one of the best in the nation as they average 563.2 yards per game and score 49.1 points per game. The Sooners are able to do their damage both through the air and on the ground. They are able to easily move to ball and have done so on every team that they have played this year. Kyler Murray, their Heisman candidate, runs the show at the quarterback position. He has thrown the ball for 2,689 yards and 31 touchdowns while only throwing five interceptions. Murray also has the ability to run that ball as he has gained 574 yards and seven touchdowns on the ground. This is a player that can really affect the game in a ton of different ways and no team has yet to have an answer for him. The defense for Oklahoma has been average. They do allow 391.1 yards a game and 27.9 points per game but most of that comes against the second team defense as Oklahoma blows a lot of teams out. Look for Oklahoma State to put up much less than those numbers.