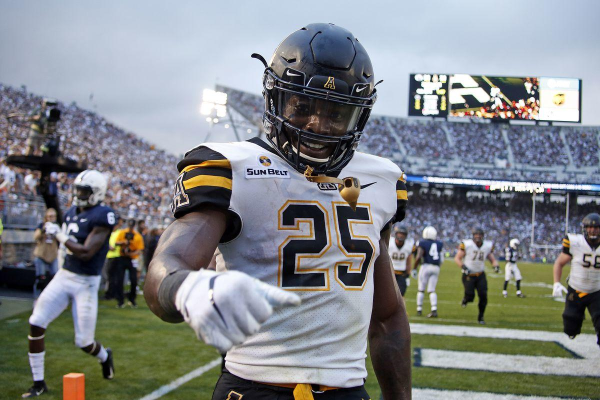 It’s official! Bowl season is underway. Over the weekend, we saw the likes of Tulane, Appalachian State, Utah State, Fresno State, and Georgia Southern all score bowl victories. And the fun is only beginning. Now let’s check out all of the off-the-field news from the college football world over the past week.

Any concern that Heisman runner-up Tua Tagovailoa wouldn’t be ready for the College Football Playoff appears to be dissipating. Tagovailoa returned to Alabama practice less than two weeks removed from surgery to treat a high ankle sprain. Alabama’s backup Jalen Hurd had the same procedure earlier this season and needed three weeks to recover. That should give Tagovailoa enough time between the SEC Championship Game and the Orange Bowl on December 29.

The new head coaching hires in college basketball are still coming in fast and furious. Here’s a rundown of all the hires from the past week.

Prior to their bowl win, Appalachian State named Eli Drinkwitz their new head coach. The 35-year old was most recently the offensive coordinator and quarterbacks coach at NC State. He has also spent time at Boise State, Auburn, and Arkansas State.

Temple has named former Miami defensive coordinator Manny Diaz as their new head coach. Diaz is the creator of the infamous “Turnover Chain” that will reportedly stay with the Hurricanes. This is his first job as a head coach.

Akron has named Tom Arth its new head coach after firing Terry Bowden. The 37-year old spent four seasons as the head coach of Division III program John Carroll, taking the Blue Streaks to the national semi-finals in 2016. He has spent the last two years as the head man at Chattanooga, going just 9-13 with the Mocs

While some coaches are moving to new positions, other coaches are choosing to hang around a long time. Let’s check out all of the coaches who have received extensions over the past week.

Syracuse coach Dino Babers signed a “long-term” extension this week, although the school didn’t release specifics about the length of his new deal. After going 4-8 in his first two seasons, Babers led the Orange on a 9-3 campaign this year and the program’s first bowl game since 2013.

Elsewhere in the ACC, Boston College gave Steve Addazio a two-year extension through the 2022 season. The Eagles started the season 7-2 but dropped their final three games to finish 7-5. Addazio is 38-38 in six seasons at B.C. but has never won more than seven games in a season. However, he can change that when the Eagles play Boise State in the First Responder Bowl.

Minnesota’s P.J. Fleck got one year added to his contract after the Golden Gophers rallied late in the year to finish 6-6 and earn a bowl spot. He was given a similar extension last year before his team fell one game short of a bowl bid. Fleck is now under contract through the 2024 campaign.

Most of the head coaches that will be fired have already been fired. However, player movements are just beginning. Here are the more notable players who will be on the move this offseason.

SMU quarterback Ben Hicks will be seeking a grad transfer for next season, likely to a power conference school. Hicks has started the last three seasons and is the school’s all-time leading passer with over 9,000 passing yards. Both Hicks and the Mustangs had down seasons after losing top receivers Courtland Sutton and Trey Quinn, but Hicks should garner plenty of interest from major conference programs.

For the second straight offseason, Quinten Dormady is on the move. A year ago, he transferred from Tennessee to Houston. Now Dormady is on his way to Central Michigan. He played sparingly for Houston this year, enabling him to take a redshirt and get one more year of eligibility. Rather than sit behind D’Eriq King at Houston, Dormady should get a chance to earn the starting job at Central Michigan with new head coach Jim McElwain.

Recently disgraced former Maryland coach D.J. Durkin has been hanging around Nick Saban and Alabama, and it caused enough of a stir for Saban to issue a statement on the matter. Saban stated that Durkin was observing the Crimson Tide in a “consultant-like capacity,” something many coaches have done in recent years. Durkin will not travel with the team to the Orange Bowl, and there’s no reason right now to think that he will be hired at Alabama for next season. However, it will be interesting to see how Durkin’s job prospects are after everything that happened at Maryland.