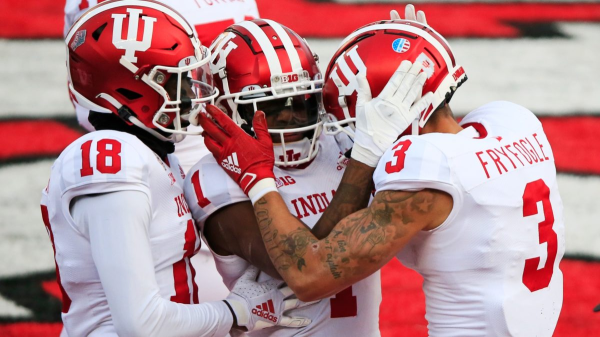 Indiana has been one of the biggest surprises of the college football season to date. The Hoosiers won their first four games and moved into the top 10 prior to a big showdown at national title Ohio State. It looked like the Buckeyes would run away with the win, but Indiana showed that their early success was not a fluke by rallying to make it a one-score game in the fourth quarter. In the end, they fell 42-35 to drop their first game of the season, but clearly this is a program on the rise.

This week, Indiana will look to get back in the win column against a Maryland team that hasn’t played since November 7. After a 2-1 start, the Terrapins have had games against Ohio State and Michigan State canceled due to COVID concerns in their program. With those issues now in control, Maryland can finally return to the field.

Indiana came in at #12 in this week’s inaugural College Football Playoff rankings, and with three games left, a New Year’s Six bowl game is within their sights. That would be a momentous achievement for a program that has not had much success historically.

Will the Hoosiers’ dream season continue, or will the Terps pull off the upset?

Will rust or rest be a factor for Maryland? As mentioned above, Maryland has not played in three weeks. That means they are certainly a lot less dinged up than their opponents, but there may be some rust to shake off.

Fast starts were a big part of Indiana’s four wins. 85 of the 125 points scored by the Hoosiers in their wins came in the first half (17 vs. Penn State, 20 vs. Rutgers, 24 vs. Michigan, 24 vs. Michigan State). If the rust shows for the Terps early, they could find themselves in a big hole.

If rest is a factor, Maryland running back Jake Funk, who ran for 221 yards against Minnesota, needs to use his fresh legs to his advantage. Indiana is giving up 150.2 rushing yards per game and allowed 307 yards on the ground against Ohio State, so a big day could be in the cards for Funk.

Mistakes could be critical. Forcing turnovers has been a vital part of Indiana’s success. They have 15 takeaways already this season, with two or more in every game thus far. Against Ohio State, the Hoosiers had four turnovers of their own, but three interceptions of Heisman Trophy candidate Justin Fields–which matched the total number of picks he’d thrown in his collegiate career prior to the game–was a big reason they were able to stay in the game long enough to stage a rally.

Maryland’s defense is unlikely to trouble Indiana like Ohio State’s did, so it is imperative for Terps QB Taulia Tagovailoa to be as sharp as he was in their wins over Minnesota and Penn State.

Penix must be sharper. Many talented quarterbacks have had struggles against Ohio State, so Michael Penix, Jr. having some ups and downs in the first couple of quarters is nothing to write home about, especially when he still ended up throwing for 491 yards and five touchdowns.

But he will need to be much more accurate than he was against the Buckeyes, as he completed only 52.9% of his passes (27 of 51). Prior to last week’s game, Penix had completed over 63% of his passes in his previous three games after a so-so statistical showing in the opener against Penn State.

Indiana -6.5 1st half: Indiana had a rough first half against Ohio State, falling behind 28-7 at the break. But they have been strong in the first half in their other games, and after a tough loss in Columbus, will be eager to make a strong statement against Maryland. After not playing for a few weeks, the Terps may be rusty coming out of the gate.

Given that Indiana is not accustomed to the notoriety and success that has occurred this season, is there reason to think that they could come crashing back down to earth after losing last week. It’s certainly possible. But their valiant second-half comeback effort against Ohio State showed that this team is no joke.

Tagovailoa was fantastic in Maryland’s wins prior to their extended layoff, and he could certainly make things interesting. And Maryland could run the ball well against an Indiana defense that has given up some yards on the ground. But in the end, the Hoosiers will be too much for the Terps. A win by at least two touchdowns is a good shout, so back the Hoosiers to cover the spread as they move to 5-1.