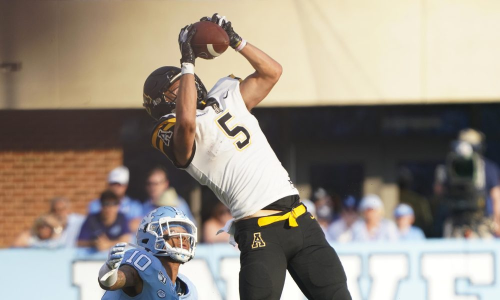 For the last few years the Sun Belt conference has been the domain of the Appalachian State Mountaineers. Now there might be a changing of the guard in the conference.

App State lost at Coastal Carolina a couple of weeks back, giving the Chanticleers a pretty clear path to the Sun Belt Championship game. They have struggled to play up to expectations, going just 2-7 ATS on the season. They are still winning ball games, 7-2 SU, but not dominating in the league the way they have in the past. Having a third head coach in three season has a way of messing with the formula. There is just something off about them and bettors have been the casualties.

For Louisiana, they are hoping to hold on to their coach, Billy Napier, as long as possible (he is getting a lot of interest from available openings and did last year too). The Cajuns have only one loss on the season, to Coastal Carolina as well, and are one of the more complete programs in the conference right now. They have won five games since the loss, most recently hanging 70 points on UL-Monroe. They are not favored though, and that could help with motivation.

The Mountaineers are still the strongest brand in the Sun Belt. When you see a three point line it generally means that home field is the difference, but that might be a little generous to App State here. They have been a disaster against the number this season, with senior QB Zac Thomas already having thrown more interceptions than he has in each of the last two seasons. His effectiveness running the ball is down too.

There is still a lot to like in the way that App State is very balanced offensively but Thomas has not been good in their games against quality opponents this season. Both losses and that used to be the opposite, he had been very consistent the last two seasons. It is hard not to like the visiting side here and they are one of my favorite plays this week.

They have good momentum and actually have not lost on the road this season. They have pretty much wrapped up their division and another date with CCU, but I expect that Napier will have them buzzing about beating the Mountaineers, something they have never done. They are just sharper in all facets of the game this season.

If you couldn’t tell from the above, I am high on the Cajuns here. Yes, they have never beaten the Mountaineers, but we are only talking about eight games and last season they got closer than they have in past losing by just a TD. This season, they definitely have a coaching advantage and perhaps a chip on their shoulder too. I am not reading too much into that 70 point performance, but it is encouraging because in the past it has usually been the offense that has let them down against App State. If they can get even half of that, which is exactly their season average, then they can get the outright win too.

Both of these teams are 3-6 O/U on the season. That is not a huge surprise as both are solid on defense, while on offense, they are more efficient than explosive (disregard that 70 spot, Monroe is terrible). When both are playing the way they want they are very balanced on offense and both have running attacks that can really grind up yardage and clock.

I like Louisiana a lot and I think Napier is going to have his team very focused on getting a win. That can mean a very simple strategy of getting the lead and then using the running game to bleed some clock and avoid mistakes. I actually think both teams might play this way so even if I am wrong above the under looks solid here. Last year the game went over, but the three matches prior to that were all unders where no team scored more than 30 points. That is kind of game I am looking for.