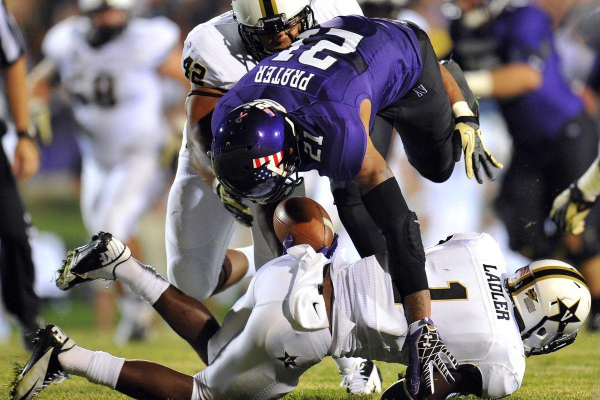 Believe it or not, there are just two more weeks of the college football regular season. That means we are getting close to the conference championship games and the College Football Playoff. Let’s take a look at everything we need to know about this past weekend.

To some, it may have been a little surprising, but every team in the top-10 of the CFP rankings won this past weekend. Oklahoma needed to stop a 2-point conversion in the final minutes while LSU’s win over Arkansas ended up being too close for comfort, but all 10 teams held serve. That will likely mean no major shakeups in the rankings this week. Teams like Oklahoma, West Virginia, LSU, and Washington State are hanging in there, but they’re going to need help while the rest of the top-10, even those outside the top-4, know that they can play their way into the playoff if they keep winning.

The winner of the Big Ten East division will come down to the Michigan vs. Ohio State game in a couple of weeks, but the West division is all locked up, and it’s the Northwestern Wildcats who will be going to the Big Ten Championship Game for the first time. The Wildcats beating Iowa on the road, coupled with Wisconsin and Purdue losing, clinched the West division for Northwestern. Keep in mind that Northwestern was 1-3 overall and 1-1 in conference play at the end of September. But they’ve won five of their last six games, losing only a non-conference game to Notre Dame. Even with two games left, the Wildcats know they will be in Indianapolis on December 1 for a conference championship game.

It turns out Louisville’s 54-23 loss to Syracuse on national TV Friday night was one too many lopsided losses for the school to take. On Sunday, Louisville fired head coach Bobby Petrino after the Cardinals lost their seventh straight game to drop to 2-8 on the season. Petrino will not coach the final two games of the season. Louisville has tumbled hard after Lamar Jackson left for the NFL. Despite Petrino being considered an offensive mastermind, the Cardinals have scored the fewest points in the ACC this season. It doesn’t help that they’re also giving up 42 points per game. Purdue’s Jeff Brohm, a former Louisville quarterback, figures to be the top target in replacing Petrino.

After missing Saturday’s win over Florida State due to injury, Notre Dame quarterback Ian Book is expected to start Saturday against no. 12 Syracuse. Irish head coach Brian Kelly said Sunday that Book is expected to start practicing again on Tuesday and is in line to start the neutral site clash at Yankee Stadium. If Notre Dame wins their final two games of the season against both the Orange and away at USC the following week, it’s highly likely they will be invited to the College Football Playoff. Getting Book back for those final two games is critical for Notre Dame’s chances.

Michigan State is making good use of the new redshirt rule for running back LJ Scott. After hurting his ankle in the second game of the season, Scott has struggled to come back and make an impact. However, since he’s only played in four games this season, he’s still eligible to take a redshirt year. Prior to Saturday’s game against Ohio State, Scott made the decision to sit out the rest of the season and return to Michigan State next season rather than exhaust his last year of eligibility. Scott was MSU’s leading rusher in each of the previous three seasons and his injuries issues have held back their running game this year. But the Spartans will surely be glad to have him back and hopefully healthy in 2019.

What’s better than going from worst to first? Going from non-existent to first. Less than four years ago, the UAB football program was shut down, only to be reinstated months later. After UAB had no football team in 2015 and 2016, the Blazers returned last season and in their second year back, UAB will have a chance to win a conference championship. The Blazers beat Southern Miss on Saturday to clinch the Conference-USA West division. They are 9-1 overall and 7-0 in conference play heading into next week’s non-conference game against Texas A&M. The Blazers also have a chance to host the Conference-USA title game on December 1.