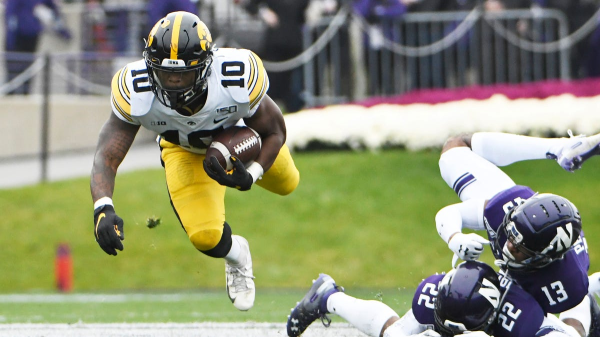 Saturday features a Big Ten showdown as the No. 18 Iowa Hawkeyes (6-2) travel to Camp Randall Stadium to take on the No. 13 Wisconsin Badgers (6-2). Both of these teams sit in second place in the Big Ten West, two games behind unbeaten Minnesota. Still, with Minnesota having a tough matchup against Penn State on Saturday, this could be an opportunity for one of the teams to close the gap. Kickoff for this one is scheduled for 4 pm ET.

Iowa comes into this one having won two in a row after shutting out Northwestern last week 20-0 and beating Purdue 26-20 the week before. The Hawkeyes’ only two losses of the season have come against Top-25 ranked teams, as they lost to No. 5 Penn State 17-12 and No. 14 Michigan 10-3. Still, in both of those games, the defense prevailed as they allowed a combined 27 points in the two games. They hope that their defense can shut down a solid running game from Wisconsin to move into sole possession of second place in the Big Ten West.

Wisconsin is coming off of a bit of a cold streak. After beating Michigan State 38-0 about a month ago, they have since lost to unranked Illinois 24-23 and got obliterated by Ohio State 38-7. The Badgers will look to turn their fortunes around but will have to do so against one of the best defensive units in the nation in the Hawkeyes.

The Wisconsin Badgers come into this as nine-point favorites playing at home. The over/under for points scored is set at just 38 points.

On the offensive side, it is the Wisconsin Badgers who hold the edge. On the season, they rank 20th overall, averaging 35.6 points per game (41.2 at home). For the Iowa Hawkeyes, they fall to 86th in the nation, averaging just 24.4 points per game (13.7 on the road).

On the defensive side, these are two of the best teams in the nation. Iowa holds the advantage in defensive scoring as they rank third in the country, allowing just 10.1 points per game (9.0 on the road). Wisconsin is just one spot behind, tying for fifth and allowing 11.4 points per game (5.8 at home).

The Iowa Hawkeyes certainly have an elite defense; however, it is the offense that has given the team fits at times this year. Hoping to do enough versus a tough Wisconsin team, the Hawkeyes turn to Nate Stanley, who has thrown for 1,950 yards with 10 touchdowns and five interceptions.

The leading receiver for the Hawkeyes has been Brandon Smith, with 33 receptions for 407 yards and four touchdowns. Unfortunately for Hawkeyes fans, it appears that he will likely miss this game due to an injury. Ihmir Smith-Marsette has also had a decent campaign, hauling in 30 catches for 463 yards and three touchdowns.

On the ground, it has been a combination of Mekhi Sargent (443 yards, four touchdowns) and Toren Young (357 yards, one touchdown). The Hawkeyes are going to need to be clicking on all cylinders to have a chance against Wisconsin.

Wisconsin has looked miserable on the offensive side the last couple weeks, and they don’t get much of a break this week against Iowa’s defense. The Badgers have relied heavily on star running back Jonathan Taylor, who has rushed for 1,009 yards and a whopping 15 touchdowns. To succeed, though, they are probably going to need Jack Coan to produce in the air, too. Thus far, he has had a good but not great season under center. He has thrown for 1,491 yards, 10 touchdowns and two interceptions.

Coan’s leading receiver has been Quintez Cephus, with 27 catches for 410 yards and three touchdowns.

Never mind the fact that Wisconsin has not looked great over the last two outings, losing to Illinois and getting blown out by Ohio State, I am focusing on the unders here. The total has gone under in Iowa’s last four games and Wisconsin’s last five games. Given that the total is set at just 38 points, that doesn’t leave a lot of wiggle room for a nine-point spread.

I do think that Wisconsin will end up winning this one, but I have a hard time spotting them nine points against a defense that is in the top-10 against both the run and the pass. Obviously, Wisconsin will have a boost playing at home, but for my money, I am taking Iowa and the points.