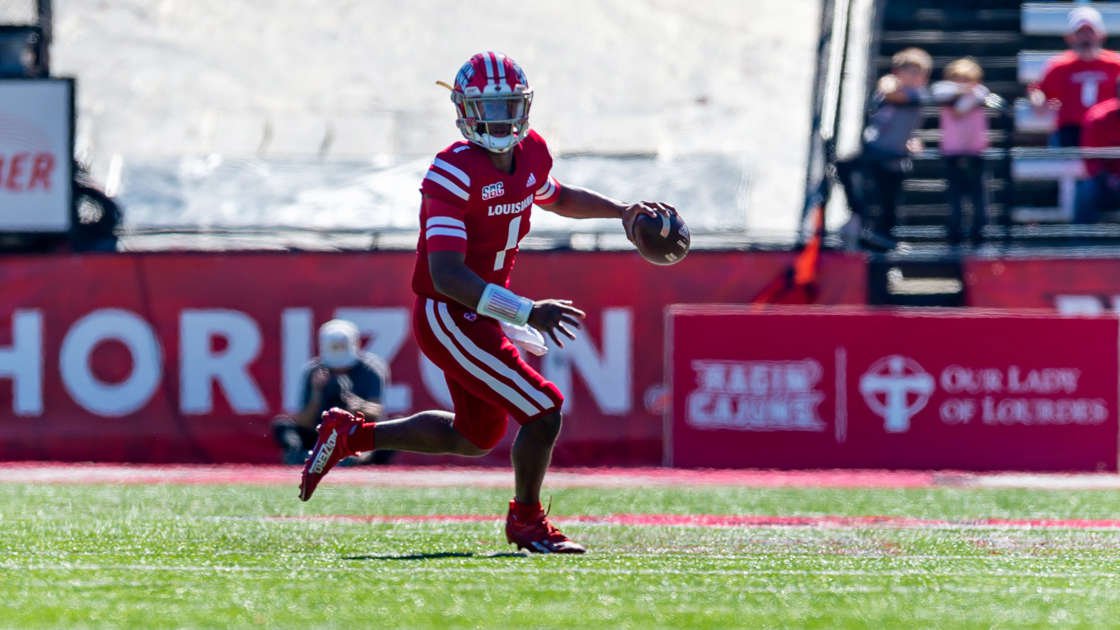 After being ranked in this week’s AP poll, the Louisiana Ragin’ Cajuns might have hoped to be included in the first College Football Playoff rankings of the season when they were released on Tuesday. But like fellow high-achieving Group of Five teams SMU, Houston, Coastal Carolina, and UTSA, the Ragin’ Cajuns were on the outside looking in.

While likely unexpected, it does present an opportunity for the Ragin’ Cajuns to be a little extra fired up for tonight’s Sun Belt showdown with Georgia State. Louisiana is on a roll with seven straight wins since a season-opening loss to Texas, and the odds heavily favor an eighth straight win.

Georgia State had a rough start to the season, taking some lumps in losing four of their first five games, with a controversial near-upset of Auburn mixed in. But they are on their own roll entering November, having won three games in a row. Heading into back-to-back trips to Louisiana and Coastal Carolina, the Panthers find themselves part of a three-way tie for first in the East Division. Can they make things interesting tonight in Lafayette?

Things have picked up overall since a win at South Alabama, in which Louisiana totaled a season-low 283 yards. In their last three games, the Ragin’ Cajuns averaged 38 points and over 475 yards per game. Last time out, they put up 45 points and 425 yards in a 45-0 win over Texas State last Saturday.

Georgia State has also warmed up on offense after a slow start. Starting quarterback Quad Brown struggled early this season and was benched in favor of Furman transfer Darren Grainger. It hasn’t been a perfect transition to the highest level of college football, but Grainger looks the part now. Behind efficient passing and solid production with his legs, Grainger has led the Panthers to three straight wins. In the win streak, Georgia State has averaged almost 478 yards per game. Will continued success give them a chance tonight?

Defensively, neither team stops the run particularly well. Both teams allow an average of four yards per carry, so production should be no issue on either side. It is worth noting that Louisiana held Appalachian State to 78 yards rushing in a 41-13 win, but the Mountaineers were without Camerun Peoples, the other half of their two-pronged rushing attack. If Texas State could exceed their season average despite being blown out, Georgia State should have a very productive night.

Where the game could be decided is each team’s recent affinity for takeaways and Georgia State’s pass defense. The Ragin’ Cajuns have forced seven turnovers in their last two home games, while the Panthers have had multiple takeaways in each game of their current win streak.

Louisiana QB Levi Lewis makes few mistakes, however. He has thrown only 17 interceptions in 1,015 career pass attempts and has never had a multi-interception game at Cajun Field. Look for Lewis to be at his best tonight. Georgia State’s defense allows 8.4 yards per pass attempt and was torched by Appalachian State’s Chase Brice a month ago.

Louisiana coach Billy Napier continues to be a hot name in college football coaching rumors for a reason, and a win tonight will add another division title to his resume.

The 2022 French Open is underway at Stade Roland Garros in Paris, France, and we are already almost through the first week of play. Tomorrow, the remaining third-round matches will take place, after which the men’s and women’s singles draws will be down to their final 16 contenders. In both men’s and women’s singles, there END_OF_DOCUMENT_TOKEN_TO_BE_REPLACED