Georgia Aims for Return to Win Column at Kentucky 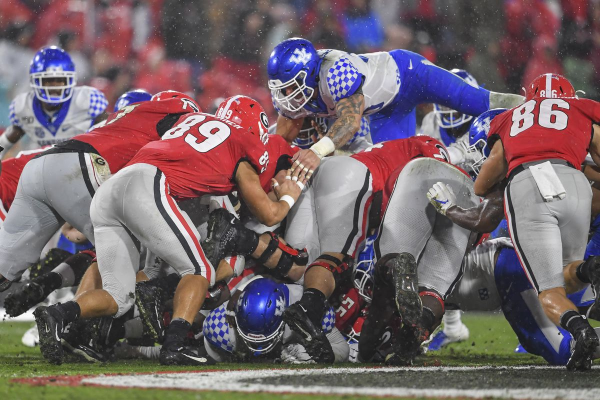 Fifth-ranked Georgia heads to Kentucky for a noon ET Saturday kickoff, returning to action for the first time since a humbling 41-24 loss at No. 2 Alabama on Oct. 17. While the Bulldogs (3-1) spent last week looking for answers after allowing 24 unanswered points to the Crimson Tide, the Wildcats (2-3) saw their bid for a third-consecutive victory smothered in a 20-10 defeat at Missouri.

Georgia’s defense was expected to lead the way while the Bulldogs figured out a muddied quarterback situation following the preseason opt-out of Wake Forest transfer Jamie Newman. Stetson Bennett came on in relief in the season opener and sparked Georgia to 108 points across the first three games. Things fell apart against the Crimson Tide after halftime as a 24-20 Bulldogs advantage disappeared, and Bennett finished the night with three interceptions, while the Georgia defense allowed 564 yards of total offense.

The Wildcats need a much better effort on offense after recording just 145 yards of total offense against Missouri, 75 coming on one drive in the second half. Terry Wilson finished 4-for-11 passing for 38 yards and split time with Joey Gatewood under center, while Kentucky rushed for only 95 yards on 22 carries on a day its offense ran a season-low 36 plays. It was too much for the Wildcats defense – which was on the field for 43 minutes, 10 seconds.

FanDuel likes the Bulldogs to bounce back in this one, installing Georgia as a 17.5 points road favorite. The Bulldogs sit at -1050 to win while Kentucky’s moneyline is at +630. The over/under for total points is 42.5.

The Bulldogs offense was shut out for the final 30 minutes, 23 seconds against Alabama, a rare quiet spell for a unit ranked fifth in the SEC in scoring offense (33 points per game) and sixth in total offense (418.5 yards). Georgia sits fifth in the league in rushing yards per game (165.3) and seventh in passing yards per contest (253.3).

Even with last week’s subpar offensive showing, Kentucky ranks second in the SEC in rushing yards per game (184.4) and has rushed for at least 400 yards four times in its past nine games dating to last season. The Wildcats rank last in the league in passing yards per game (124) and have not passed for more than 151 yards in four straight contests.

The Wildcats defense continues to impress after opening the season by surrendering 71 points in back-to-back losses to Auburn and Ole Miss, allowing 20 points per game (second in the SEC; 20th nationally). Kentucky has given up just 29 points in its past three games and is tied for second nationally in interceptions (nine). One key to watch is turnover margin: the Wildcats are +8 in their two victories and -5 in their three defeats.

Georgia failed to slow down Alabama’s high-powered offense, after surrendering a combined 37 points and 710 yards of total offense in its first three games. It was a rough night for a unit featuring several standouts, including safety Richard LeCounte (his three interceptions are tied for tops nationally) and linebacker Monty Rice (team-leading 24 tackles).

Bennett – even with completing just 18-of-40 passes with three interceptions against Alabama – has steadied the offense at quarterback, completing 57.2 percent of his attempts while passing for 958 yards and seven touchdowns in four games. Zamir White leads the rushing attack with 266 yards and five touchdowns, while true freshman Kendall Milton is averaging 6.4 yards per carry.

If the Wildcats are going to have any shot at ending their 10-game losing streak to Georgia, it has to improve on last week’s effort offensively and keep possession for longer than 16 minutes, 50 seconds. It starts with the running game, as sophomore Chris Rodriguez Jr. (who gained just 48 yards on nine carries a week ago) sits 119 yards shy of 1,000 for his career.

Take Georgia to Win and Cover

Many Georgia fans will have one eye on next week’s SEC East showdown with No. 10 Florida in Jacksonville. But following their performance at Alabama and an off week to hear about it from coach Kirby Smart, the Bulldogs will be motivated to rediscover their stride on both sides of the ball in Lexington. Take the over in this one as Georgia easily covers.