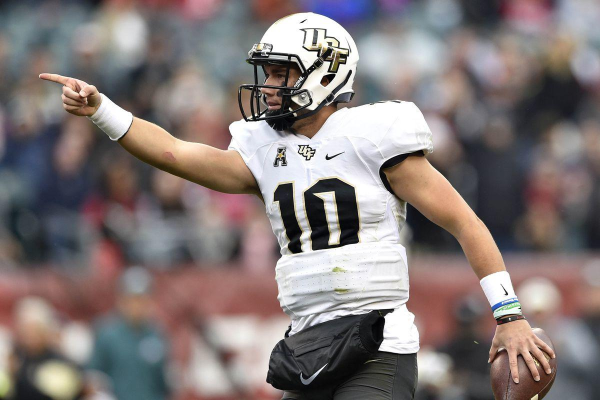 Happy New Year! Unfortunately for the UCF Knights, though, it is a new year but the same situation. The Knights have once again gone undefeated but have no chance of playing for a national championship. Instead, they will take part in the Fiesta Bowl as the number 11 LSU Tigers (9-3) take on the number 8 UCF Knights (12-0). This game will be played at the University of Phoenix Stadium. UCF comes into this contest having won 25 games in a row and won the American Athletic Conference easily.

Like last year, they got no love from the selection committee and are probably even more motivated seeing how the number 3 and 4 seeds (Notre Dame and Oklahoma) did in the playoffs. Still, they will be playing without quarterback McKenzie Milton, who suffered a leg injury requiring multiple surgeries, but still have shown flashes of excellence on both sides of the ball.

For LSU, their 3 losses all came against ranked opponents. They lost to Florida 27-19 back in October, lost to Alabama 29-0 in early November and lost to Texas A&M 74-72 in a wild one that took 7 overtimes. The two will square off Tuesday with kickoff scheduled for 1:00 pm ET.

The point spread for this one comes in with the LSU Tigers as 7-point favorites. The over/under on total points scored is set at 57.5 points.

In terms of total defense, LSU was the better of the two teams. They ranked 29thin the nation in opponent’s yards per game, allowing an average of 346.1 yards. UCF came in at 86th, allowing 423.6 yards. One area that UCF did excel was in turnover margin as they were tied for 3rdwith an average +1.17 per game. LSU was not too far behind, though, as they tied for 6th at +1 per game.

Ed Orgeron and LSU are looking to end an up and down season on a positive note. To do so, they will look to Joe Burrow to lead their offense under center. On the season, Burrow had 2,500 yards, 12 touchdowns versus just 4 interceptions. He also had 375 yards rushing with an additional 7 touchdowns. The two strongest running backs, though, were Nick Brossette and Clyde Edwards-Helaire. Brossette rushed for 922 yards and 14 touchdowns on 211 carries while Edwards-Helaire had 626 yards rushing and 7 touchdowns. Even though Edwards-Helaire was involved in an off-the-field incident that saw a man killed, he is expected to play in this one.

Through the air, the leading receiver for the Tigers was Justin Jefferson. He had 50 receptions for 788 yards and 4 touchdowns. The Tigers had 5 other players with 200+ yard seasons, each having recorded at least one touchdown.

Defensively, the leaders for the Tigers are Devin White (115 tackles) and Grant Delpit, who led the team in both sacks (5) and interceptions (5).

For UCF, This Is Their National Championship

After being snubbed for the second year in a row, one thing is for certain… the UCF Knights will be treating this like a national championship game. The self-proclaimed “national champs” from last year want to prove a point that they, once again, should have been included in the playoffs. To do so, coach Josh Heupel will turn to backup quarterback Darriel Mack Jr.

On the season, Mack threw for 522 yards and 2 touchdowns (with no interceptions). He also rushed 58 times for 340 yards and 6 touchdowns. The leading receivers for the Knights are Dredrick Snelson (41 catches, 664 yards, 5 touchdowns), Gabriel Davis (50 receptions, 756 yards, 6 touchdowns) and Tre Nixon (40 receptions, 562 yards, 4 touchdowns).

Defensively, the team is led by Richie Grant (101 tackles and 6 interceptions) and Titus Davis (6.5 sacks).

Choosing UCF, But Might Be Based On Emotion Not Reason

I will be honest with you, I am not a fan of just having 4 teams in the playoffs for the national championship and UCF is a perfect example of why. An undefeated team should have the chance to play for it all 100% of the time. With what UCF has shown not just this season, but last season as well, I am jumping on their bandwagon and putting my money on them at +7. Realistically, LSU might be the sounder bet, especially with some of the Knights’ injuries, but I think UCF has a chip on their shoulder again and will look to make a statement with this game.