College Football is Back! News and Notes Leading into Week 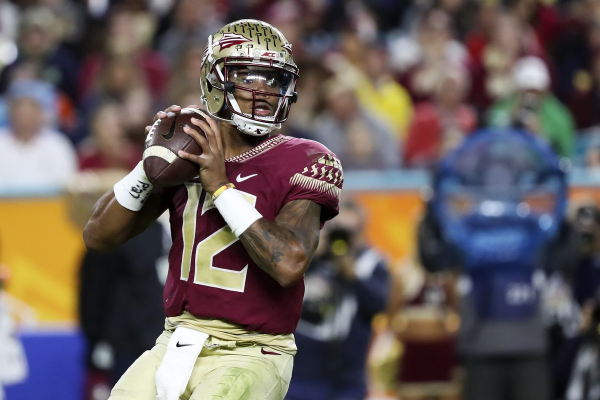 There may have been a few college football games last weekend, but the real season gets underway this weekend. With so much going on over the past week, let’s get you caught up on the big stories you may have missed.

LSU has finally named its starting quarterback for the season opener, and Ohio State transfer Joe Burrow. After losing ground in the Ohio State quarterback battle during the spring, Burrow left Columbus for Baton Rouge over the summer and has proceeded to beat out Myles Brennan for the job. The Tigers are opening the season against Miami, so Burrow will be tested right away.

After missing almost the entire 2017 season due to injury, DeondreFrancois has earned back his job as the Florida State starting quarterback. Francois was hurt in last year’s season opener against Alabama, suffering a season-ending knee injury. James Blackman filled in admirably last year and provided genuine competition for the starting job under new coach Willie Taggart. However, it’ll be Francois getting the start when the Seminoles open the season against ACC rival Virginia Tech on Monday night.

Speaking of Florida State, former Seminoles coach Jimbo Fisher, who is now at Texas A&M, has named Kellen Mond the Aggies starter for Thursday’s season opener against Northwestern State. However, Nick Starkel is also scheduled to play. Fisher doesn’t have a specific plan for how he’ll rotate the two quarterbacks, but Mond obviously didn’t stand out enough to win the permanent job, so one can assume the position remains unsettled heading into the season.

After leading your team to the College Football Playoff, you’d think your job would be safe, but not at Alabama, and apparently, not at Clemson either. Clemson coach Dabo Swinney announced over the weekend that Kelly Bryant will begin the season as the starting quarterback after he started every game last season. However, true freshman Trevor Lawrence apparently gave him a run for his money during training camp. One has to wonder how long Bryant’s leash will be this season with the way Lawrence performed during the spring and thus far in the preseason.

The Odyssey of former five-star prospect BlakeBarnett will finally result in him being a starting quarterback. Barnett has been named the starter for South Florida in their season opener. Barnett started Alabama’s opener in 2016 but was soon replaced by Jalen Hurts. After a brief stint in junior college, he transferred to Arizona State but failed to win the starting job there. He’s now at USF as a grad transfer and should get more of a chance to prove himself now that he’s won the starting job.

Unfortunately, the start of the season doesn’t just mean quarterback decisions, it also means players getting suspended for off-field transactions. Both UCLA and Iowa State have announced that several players will be suspended for at least the season opener. Indiana has also suspended running back Morgan Ellison, their leading rusher a season ago. Mississippi State has also suspended starting quarterback NickFitzgerald, a dark horse Heisman contender, for the team’s season opener against Stephen F. Austin.

In his first season at Nebraska, Scott Frost is handing the offense over to true freshman Adrian Martinez, who was announced as the team’s starting quarterback over the weekend. However, soon after Martinez was announced as the starter, redshirt freshman Tristan Gebbia, who battled Martinez throughout training camp, announced his intentions to transfer. Frost said he was caught a little off guard that Gebbia wanted to leave after not winning the job. He appears to be on his way to Oregon State. The Cornhuskers now have only a pair of walk-ons on the depth chart behind Martinez, which could end up being a problem.

We’ll close with a story that deserves as much attention as possible. Indiana quarterback BrandonDawkins has announced he will walk away from the game of football in order to address concerns with his mental health. Dawkins spent his career at Arizona before moving to Indiana as a grad transfer over the summer, although he did not win the starting job out of training camp.

“The most important thing to me though has been the joy that the game always brought me. Over the last couple of years I lost touch with that joy. I respect and love the game, but I have lost touch with it. I am not too proud to admit that I needed help,” Dawkins wrote in an Instagram post. “As my mental health is deteriorating I have decided to take a break from the game. I know now that I need to take care of ME. I need to make myself important. I have not properly taken care of myself.”