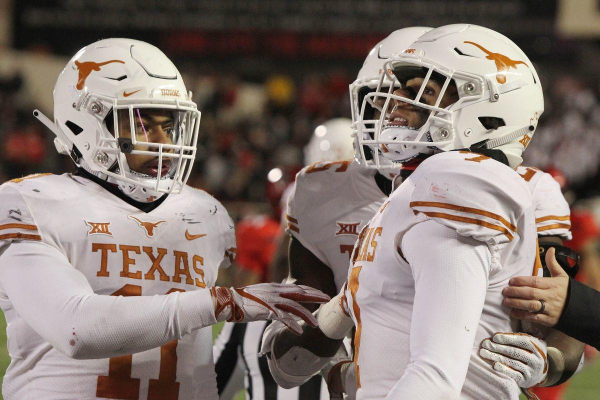 A matchup of ranked teams in Darrell K. Royal-Texas Memorial Stadium between Iowa State and Texas was not exactly expected to start the season. Under the second year of Tom Herman, the Longhorns have burst onto the national scene after starting slow with a loss vs. Maryland. The Longhorns have beaten USC, TCU, and Oklahoma this season, but have lost 2 of their last 3 by a combined 4 points. Both of these losses were heartbreaking to a Texas program that suddenly burst into the top 5 of some polls, especially since they were so close and to two quality opponents.

I have been a massive fan of Herman since he was the offensive coordinator at Iowa State. There were reports at that time that Urban Meyer would request Iowa State offensive tape early in the morning after each game while working at ESPN just to watch Herman work. About 8 years later, Herman is in a marquee game vs. his former employer. Not to get all narrative street here, as Herman left on a good note at Iowa State, but maybe this one means a little more to him than other games.

Iowa State comes into the game riding a 4-game win streak that includes a very dominant win vs. then-undefeated West Virginia and Heisman hopeful Will Grier. Iowa State impressed me early in the year vs. Oklahoma even though they eventually did lose that game by 10 points. Iowa State’s defense is hounding and has been really consistent most of the year. They have struggled to defend elite athletes to some degree, with players like Marquis Brown of Oklahoma going for 192 yards and a touchdown, but Brown is more of an outlier than anyone they will see this week. Collin Johnson and Lil’Jordan Humphrey are both capable of being NFL draft prospects, but they are not the elite speedster that Brown is. Iowa State will still need to get the pressure they got vs. West Virginia in order to completely neutralize the Longhorns.

This game will be one of the lower-scoring games in the Big 12 all year. Both teams have NFL caliber skill players, but none of them are incredibly explosive or scary for a defense. This line opened at 50.5 in most places and has been bet down 4 points. That total is LOW and I would be terrified if I was betting the over. Iowa State will be without their #1 RB for the first half of the game, which should push most of Texas’s energy to Hakeem Butler. With one clear option on offense, it could be very difficult for the Cyclones to move the ball, especially with any consistency.

Now, if you simply look at the scores of these teams, you will see that both of these teams have had big offensive games. Well, in the Big 12, that just happens. Oklahoma and Oklahoma State can’t seem to stop a junior high offense. Both of those teams have elite offensive weapons that hurt teams like Texas and Iowa State because they are simply too athletic to stop with a gritty system. The Iowa State at Iowa game shows that this Iowa State offense can struggle with a tough defense and a clogged up game. Now, I do not think that Texas wants to play as slow as Iowa, but Iowa’s offense does include a day 2/3 NFL QB prospect and one of the top TE’s in the country. It’s not THAT bad, but Iowa State will eat most offenses alive if they lack the speed and athleticism.

At the end of the day, Texas has athletes getting healthy and prepped for this matchup. Collin Johnson is 6’6, 220 LBS as a WR. Lil’Jordan is 6’4, 225 LBS. This is one of the better 1-2 combos at the WR position in college football, especially in terms of the stature. West Virginia also boasts size at the WR position, but Grier couldn’t find anyone all game. Iowa State will force Texas to block more than they would like and win the battles in the secondary. Texas hasn’t faced a defense as good as Iowa State this year, but I think that Texas is simply talented enough to score against an elite defense to some degree.

Now, does score mean 17? Maybe. Texas has shown the defensive ability to lock in and stay with elite athletes to a decent degree. I think this game could easily turn into a slog, but I really struggle to see Iowa State putting up significant points in this game unless Texas goes with them in a game that just has a strange turn of events like turnover scores or big plays. I want the Longhorns -3 at home in a game that has more clear paths for this team that is probably just more talented at the end of the day.