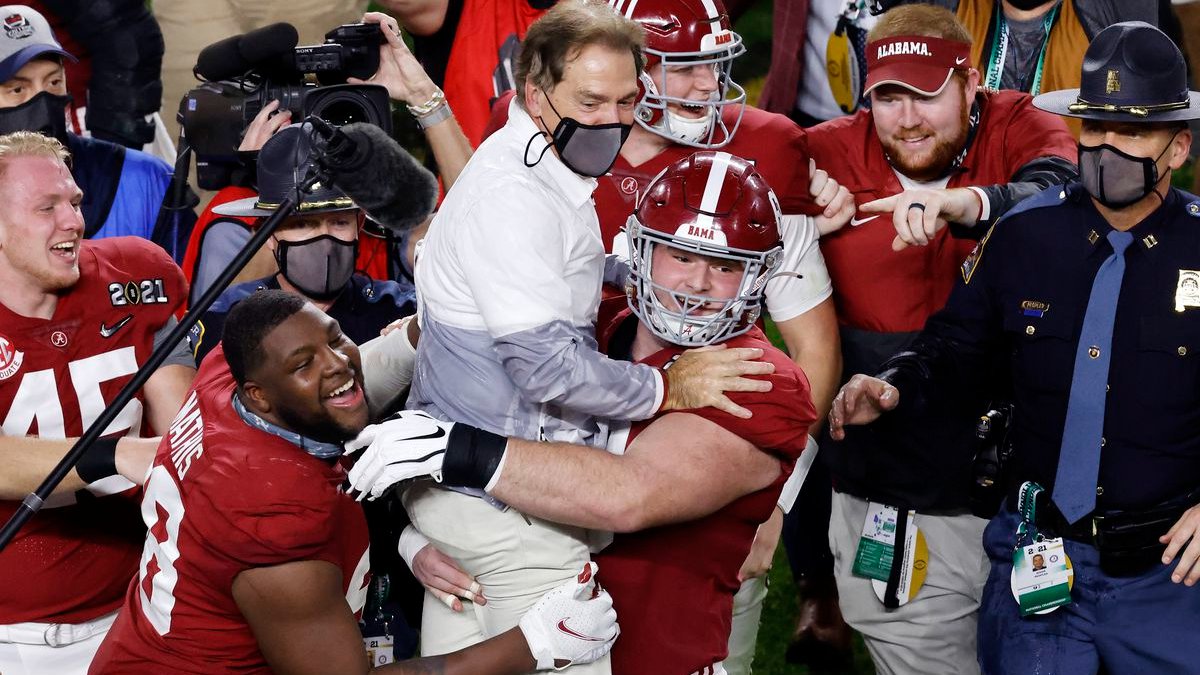 Among the nation’s top teams lies the perceived opportunity for fun and profit – but mostly profit – in the summer’s early win totals.

The question for potential investors in the best college football teams: Is there an opportunity at this point to buy or sell on those win-total numbers?

Here is a rundown of where we stand today, with a full month and a half before the season begins. Using BetMGM’s odds to win the College Football Playoff as a ranking mechanism, here is the top 10 with win totals and a comment on potential value.

If you want the over, you’re saying the Tide will roll through its schedule unbeaten. With the most difficult tests away from home (Miami, in Atlanta; at Texas A&M and at Auburn), coupled with the losses of QB Mac Jones, RB Najee Harris and WRs Jaylen Waddle and Heisman winner DeVonta Smith, the “under” at –110 seems to offer more value than hopes for a 12-0 regular season. Alabama, which also lost offensive coordinator Steve Sarkisian (he took the head-coaching reins at Texas) has the stars; it’s just that most of the nation’s fans don’t yet know about them. Sophomore QB Bryce Young will play a big part in your over/under fortunes.

The Tigers lose some star power, too, with QB Trevor Lawrence and RB Travis Etienne, but D.J. Uiagalelei (BetMGM’s No. 2 betting choice among Heisman candidates) should keep the offense moving. Again, bettors slamming the “over” are saying 12-0. They will find out in a hurry because Clemson faces its toughest test as a 3.5-point favorite against Georgia in a neutral-site matchup at Charlotte, N.C. The remainder of the schedule is feather-soft, so a “W” in Game 1 could well mean a celebration after Game 12. CBS Sports and College Football News already have the Tigers as the nation’s No. 1 team.

The key to the Buckeyes’ hopes is the performance at quarterback. It’s often said that if you have two QBs (or three, in this case), you don’t have any. At this point, it a battle among three to replace Justin Fields: C.J. Stroud, Jack Miller and incoming freshman Kyle McCord will take their fight to camp later this summer. After opening at Minnesota and at home against Oregon, the only real tests would appear to be at Indiana and at Michigan. Unless you believe the QB situation will crumble, there isn’t much value here either way.

Talk about a soft launch. The Sooners play at home from Sept. 13 through Oct. 30 with the exception of road games at Kansas State and Kansas. The Texas Longhorns could ruin the party when they play at Norman, Okla., on Oct. 9, but Oklahoma may well be favored to remain unbeaten at 9-0 heading into the final three games: At Baylor, at home against Iowa State and at Oklahoma State. Do you believe in Spencer Rattler (the favorite to win this year’s Heisman Trophy)? If so, the over may seem like a bargain, with an 11-win push as a relative disappointment.

An upset over Clemson in the teams’ first game this season (Clemson is a 3.5-point favorite) would give the talented Bulldogs a huge leg up on the over. Now, Do you believe QB J.T. Daniels and a standout defense will be enough to catch the Tigers before Clemson gets rolling? The over is tantalizing, especially since this Georgia schedule isn’t nearly so daunting as in years past. It has UAB, Charleston Southern and Georgia Tech along with the SEC matchups against South Carolina at home, at Vanderbilt, home to Arkansas, at Auburn, home with Kentucky, Florida (neutral site), home to Missouri and at Tennessee. That seems like a winner, and almost certainly so if Georgia stops Clemson.

The road schedule is favorable – except for the clash at LSU. But the home schedule includes Alabama. Does that mean the Aggies will have to run the table and win the 10 remaining games (Kent State, at Colorado, New Mexico, vs. Arkansas, Mississippi State, at Missouri, South Carolina, Auburn, at Ole Miss, Prairie View A&M)? Looks that way, and a case can certainly be made that Texas A&M will be favored in each of those. A major drawback: Uncertainty at QB (star Kellen Mond exits) and the need for a top-10 recruiting class to contribute immediately. ESPN, 247Sports, College Football News and the Sporting News all have A&M No. 3 in the SEC behind Alabama and Georgia.

It won't take long to see where the season is headed with Penn State, Notre Dame and Michigan among the first four games.

That’s the downside for those hoping to cash on the “over” this season. The upside? The Badgers, with just one win from among those three matchups and an improved offense, should have a big shot at taking down every other opponent – the toughest of those tasks are Iowa (a Wisconsin home game) and a trip to Minnesota to close the regular season. Winning two of those tough early games puts the Badgers in the driver’s seat to reward the “over” investors.

A tough November that brings Alabama and Texas A&M means that the LSU Tigers had better take advantage of their schedule in September and October, which ends with a home date against Florida and a road game at Mississippi State. Even with losses in three of those four games, though, means the Tigers have a real shot to reach nine victories and the over. USA Today cites the team’s depth and dependability:

The offensive line is back in full and Kayshon Boutte looks to be another potential star wide receiver for the program. The defense is led by All-America cornerback Derek Stingley and also features depth along the line. There's enough talent in place for a swift rebound.

CBS Sports has LSU ranked eighth in the nation.

BetMGM lists a five-way tie for 10th among Florida, Notre Dame, Miami, Penn State, Iowa State, all at +4000 to win the national title.

Win total: 9.5; over –110, under –110. Ranked as high as fourth, on ESPN's Football Power Index, and sixth among FanDuel’s national title choices, the Cyclones have road games at Baylor and Oklahoma, but QB Brock Purdy provides comfort for the “over” investors, along with the fact that Iowa State returns 19 of 22 starters — including Big 12 Defensive Player of the Year, linebacker Mike Rose.

Win total: 9.5; over +120, under –145. A 17-point underdog in their opener means the Hurricanes likely will need to go 10-1 to hit the “over,” and there is more than just one tough opponent remaining. Miami must visit North Carolina, Florida State and Pittsburgh, but all games outside of the one against Alabama are surely winnable. The Sept. 18 date with Michigan State is Miami’s lone tough home matchup.

Win total: 9; over +120, under –145. QB Kyle Trask and TE Kyle Pitts are gone, but presumptive QB starter Emory Jones provides mileage through the air and on the ground. There’s a pretty strong case for a push here, with clear paths to wins over Florida Atlantic, USF, Tennessee, Kentucky, Vanderbilt, South Carolina, Samford, Missouri and Florida State – and tough tests against Alabama, LSU and Georgia.

Win total (BetMGM win total N/A; DraftKings has them at 9; FanDuel Sportsbook at 8.5). Last season's upset of Clemson (the Tigers were without Trevor Lawrence, so they weren’t really the Tigers) was a long time ago. This schedule includes Florida State, Wisconsin, North Carolina and USC, but there are believers; Sporting News ranks Notre Dame No. 6.

Win total: 9; over +110, under –130. With an upset win in the opener at Wisconsin, Penn State could be well on the way to a 10-2 campaign. Road games at Iowa, Ohio State and Michigan State aren’t easy, but a home slate that includes Michigan and Indiana. But if the Nittany Lions fall to the Badgers, well, there’s a reason the under is –130.