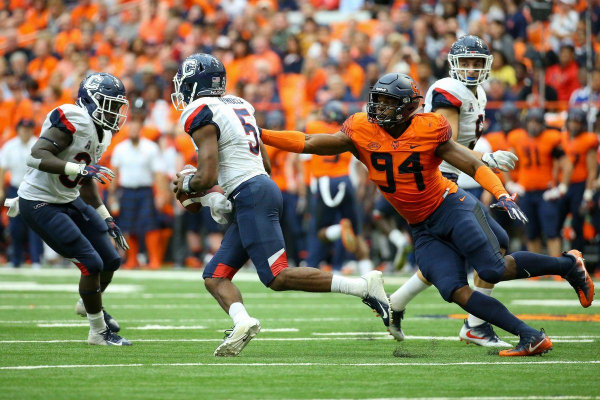 For West Virginia, they will be nervously waiting to see what they get out of their quarterback Jack Allison. He will be making his first collegiate start for the Mountaineers as Will Grier, the starter all season long, has decided to forego the bowl to prepare for the draft. It is a shame, too, because West Virginia played pretty well most of the season. They beat number 15 Texas earlier in the season and, in their last game, they only lost to number 4 Oklahoma by a field goal.

For Syracuse, they won 5 of their last 6 regular season games, with the only loss coming to number 3 Notre Dame (although it was an ugly 36-3 loss). Still, they have a defense that tries to sniff out turnovers and a relatively solid offense. Kickoff for this matchup is set for 5:15 pm ET.

The point spread for this one comes in with the Syracuse Orange as 2.5-point favorites at the neutral site. The over/under on total points scored is set at 66 points.

With Will Grier out, Syracuse is going to try to use their defense to create turnovers, much like they have all season. Syracuse ranks 9th in the nation with 17 interceptions on the season. They also rank 13th in sacks with 38. Given a quarterback making his first start and the fact that West Virginia is missing its best offensive lineman (Yodny Cajuste) as he is also preparing for the draft. As a result, Syracuse’s defense could be a major factor for the Orange. For West Virginia, they ranked 9th in the nation in passing with 3,939 yards and 38 touchdowns. They also only had 9 interceptions and 24 sacks, but once again, without Grier, these numbers should be discounted. Syracuse came in at 41st with 3,138 yards and 21 touchdowns.

West Virginia Has To Come Up With New Gameplan

West Virginia really is in a tight spot in this one as Will Grier took most of the snaps the entire season. For Allison, he played in 6 games this season, but he only attempted 10 passes. He was 6 for 10 with just 75 yards, 1 touchdown, and 1 interception. The leading receivers for the Mountaineers this season were Gary Jennings (54 catches, 917 yards, 13 touchdowns) and David Sills V (61 catches, 896 yards, 15 touchdowns). If things weren’t bad enough, Jennings will also be missing this game as he suffered an ankle injury.

Syracuse is trying to finish out a really strong season on a very good note. To do so, the Orange will look to quarterback Eric Dungey to lead the offense. On the season, Dungey was 205 for 341 with 2,565 yards passing, 17 touchdowns and 7 interceptions. He also had 732 yards and 15 touchdowns on the ground. The leading rusher for the team was Moe Neal, who had 147 carries for 827 yards (5.6 average) and 5 touchdowns.

The leading receivers for the Orange are Jamal Custis and Sean Riley. On the season, Custis had 46 receptions for 826 yards and 6 touchdowns. For Riley, he had 63 catches for 733 yards and 3 touchdowns.

Loss Of Grier Too Much For WVU To Overcome

It is certainly possible that Jack Allison has his shining moment in Grier’s absence, but I just don’t see it. With their quarterback, leading receiver and best offensive lineman out, I just think there are too many holes for West Virginia to try to plug in this game. Syracuse has been solid, albeit not spectacular, this season and I think they are strong enough to make WVU pay. I can definitely see the Orange defense taking advantage of the inexperienced quarterback, and I see the spread being very favorable for the Orange. Even though they are giving up 2.5 points, I am taking that spread all day long for Syracuse.