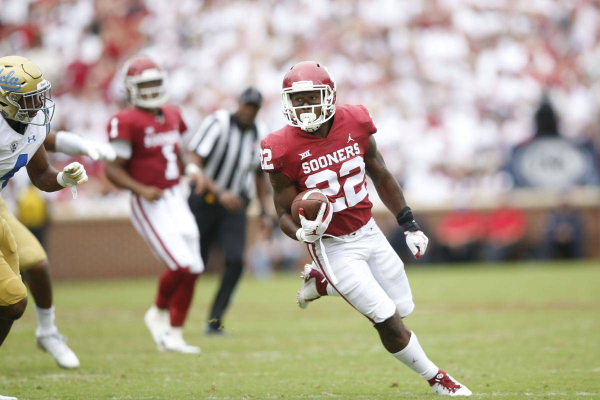 It is going to be a wild Big 12 matchup on Friday when the 6th-ranked Oklahoma Sooners (10-1) travel to Mountaineer Field at Millan Puskar Stadium to take on the number 12-ranked West Virginia Mountaineers (8-2).

For Oklahoma, their only loss of the season came back on October 6th in a 48-45 loss to the number 14 Texas Longhorns. Since then, they have rattled off five straight victories including a 55-40 win over Kansas last week. For West Virginia, they have had both of their losses in the last five games. On October 13th, they lost to number 25 Iowa State 30-14 and last week lost to Oklahoma St. 45-41. Both of these teams have prolific offenses led by two Heisman trophy candidates, but both have defenses that are susceptible to giving up points. Kickoff for this one is scheduled for 8:00 pm ET.

The point spread comes in with the Oklahoma Sooners being 3-point favorites on the road. The over/under on total points scored is set at 85 points.

To say that Kyler Murray is an unbelievable athlete would be a bit of an understatement. Not only is he a contender for the Heisman trophy this year, but he has also been drafted in another sport (baseball) to play professionally. Still, Murray’s focus right now is on helping the Oklahoma Sooners hopefully make it into the national championship tournament, and he can help their cause with a win over West Virginia. On the season, Murray has thrown for 3,310 yards on 70.3 percent completion rating. He has thrown for 34 touchdowns versus just 6 interceptions and has a quarterback rating of 205.8. He can also do it with his feet as he has rushed for 739 yards and 10 touchdowns on 104 carries.

After losing again last week, West Viriginia knows it has work to do. Led by their own Heisman candidate in Will Grier, the Mountaineers offense has been rolling most of the season. Grier has thrown for 3,325 yards on 67.2 completion percentage and has a quarterback rating of 174.2. He has 33 touchdowns and 8 interceptions. Unlike Kyler Murray, though, Grier is not nearly as versatile in the ground game as he has actually run for negative yards this season.

On the defensive side, David Long leads the team in both tackles (87) and in sacks (7). There are four players (Keith Washington, Kenny Robinson, Dravon Henry, and Toyous Avery) who are tied for the lead with 2 interceptions apiece.

Sooners Win In A Shootout

As the over/under (85) suggests, this is probably going to be much more of a shootout than a defensive battle. With that in mind, I just like the weapons that the Oklahoma Sooners have a little better than that of West Virginia. Kyler Murray has been one of the best quarterbacks in college football this season and has the weapons around him to be extremely dangerous. For my money, I am taking the Oklahoma Sooners even giving up the 3 points.