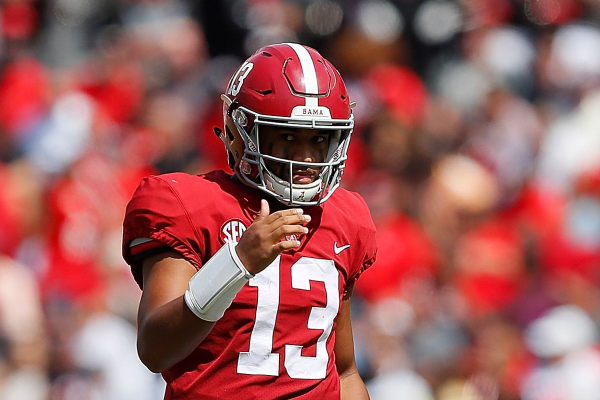 Once again, we had a college football Saturday that did not disappoint. The weekend was highlighted by four teams in the top-10 going down, plus a few more in the top-25. Let’s catch up on everything you need to know and anything you might have missed from the past weekend.

We’ll start with those four top-10 teams that lost this weekend:

Shake Up At the Polls

As expected, those upsets and more have shaken up this week’s polls. Georgia dropped to no. 8, three spots behind LSU, who once again rounds out the top-5. Meanwhile, Ohio State, Clemson, and Notre Dame trail Alabama for the no. 1 spot. Michigan and Texas both move up to no. 6 and 7, respectively. Oregon moved up to no. 12 while West Virginia dropped to no. 13, Washington to no. 15, Penn State down to no. 18, and Wisconsin to no. 23.

Bowling Green’s Mike Jinks is the first head coach casualty of the 2018 season. The school fired Jinks following Saturday’s 42-35 loss to Western Michigan that dropped the Falcons to 1-6 on the season. In two and a half seasons at Bowling Green, Jinks went 7-24. Considering he took over a program that won the MAC championship in 2015, it’s safe to say that Jinks’ tenure was a disaster. Defensive coordinator Carl Pelini has been named the interim head coach.

Should We Be Worried?

Alabama head coach Nick Saban is doing his best to downplay the seriousness of the injury that forced Tua Tagovailoa to leave Saturday’s win against Missouri. Tagovailoa was dealing with the knee issue heading into the game and then appeared to tweak it, forcing him out of the game. Saban said after the game that he doesn’t believe “there’s any issues or problems with it.” The Crimson Tide still has Jalen Hurts as their backup if Tagovailoa is held out for this week’s game against Tennessee.

Texas is another team dealing with a minor injury to their quarterback. Sam Ehlinger suffered a first-degree sprain of his throwing shoulder during the team’s win over Baylor over the weekend. Backup Shane Buechele, who split duties with Ehlinger in 2017, did a fine job of finishing the game. The Longhorns are off this week, which makes head coach Tom Herman hopeful that Ehlinger will be ready for the team’s next game against Oklahoma State on October 27.

Shop Til You Drop

Remember former Clemson quarterback Kelly Bryant? Well, while the Tigers remain undefeated without him, he’s been quick to set up visits to multiple schools as he tries to find a new home for next season, which will be his final year of eligibility. Bryant reportedly has a visit to North Carolina lined up for next weekend and a trip to Arkansas the following weekend. He is also trying to set up visits with both Missouri and Louisville. Of course, those are just four of the more than a dozen programs (all power-five programs) to have expressed some kind of interest in Bryant joining them for the 2019 season.

We’ll close with an exercise in futility, as demonstrated by the Rutgers football team this past week. During their 34-7 loss to Maryland on Saturday, Rutgers quarterback were a combined 2 for 17 passing the ball for a total of eight yards. They also threw five interceptions in those 17 attempts. If you’re scoring at home, that’s a pass efficiency rating of negative 43.1. On the season, the 1-3 Scarlet Knights have three passing touchdowns and 17 interceptions. If you think it can’t get worse, keep in mind that Rutgers still has to play Wisconsin, Michigan, Penn State, and Michigan State in consecutive weeks in November.