SEC Football Predictions & Odds for 2022: Are Georgia and Alabama Set for a Rematch? 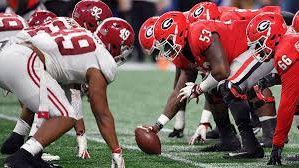 The Southeastern Conference, better known as the SEC, is made up of two divisions, the East and the West. The winner of each division plays for the SEC title at the end of the regular season.

Last season, Georgia ran away with the East, and Alabama escaped out of the West. The SEC Championship game between Georgia and Alabama was the first of two meetings. between the two schools during the postseason. Alabama won the SEC title by a score of 41-24.

However, Georgia got their revenge in the National Championship game, winning the National Title 33-18. The two schools are set to be the best in the SEC once again, and both are ranked in the Top 3 to begin the season.

The SEC East is expected to be a runaway victory for Georgia. Kentucky, Tennessee, and Florida will also have good seasons, but the 3rd ranked Bulldogs are the team to beat as the defending National Champions.

Georgia’s schedule looks pretty tame compared to other teams in the East. Their toughest game will be on the road against Kentucky late in the season. Other than that, they host Samford, Kent State, and Vanderbilt, so their schedule is a walk in the park.

The samee can not be said for a team like Florida. They will have to play 7th ranked Utah and 20th ranked Kentucky back-to-back to start their season. They also go on the road for games against Georgia and Texas A&M. That is a schedule that no team wants to see.

Georgia is returning quarterback Stetson Bennett. He lead the team to a National Championship last season, and he may just do it again if he puts up the same numbers. 2,862 yards passing and 29 touchdowns were good enough for the 3rd beest quarterback rating in the country in 2021.

Expect Georgia to win the East easily. They don’t face Alabama during the regular season, so 8-0 will be the record to chase in the Eastern Division. Quarterback Stetson Bennett, should also be a wild card option for heisman if he can put up bigger numbers.

Can anyone be better than Alabama? That’s the question to ask, as the Crimson Tide will, once again, start the season as the #1 team in the country. They do have some competition, as #6 Texas A&M would love to spoil their perfect season for a second straight year.

Alabama will face many teams in the pre-season Top 25. Road games against Arkansas and Ole Miss will be more of a challenge, but the only real test I see is the home matchup against the Texas A&M Aggies.

As far as A&M’s schedule is concerned, it won’t be easy. They have tests against Miami, Alabama, Arkansas, and Ole Miss. Their first two games will be pretty pointless, as they should demolish Sam Houston State and Appalachian State.

The real prediction to be made is the winner of the Alabama vs. Texas A&M game. It is by far the biggest game within the division this season, and it could determine who wins the West.

I really see Alabama on the road as too much of a test for the Aggies this season. Yes, they did win last season, but that was at home in a game that went down to the last second. Alabama should have an easier time this season finding ways to win by big numbers.

Alabama and Georgia should be in for another battle in the SEC Title Game. It will be a challenge to bet this game, as neither team has great value as heavy favorites. We will not get to see a preview of what could be, as the teams won’t play this season.

Honestly, it’s a coin flip. Which Georgia defense will we see? Will it be the one we saw in the SEC Title Game last season that struggled against Alabama’s offense? Or will we see the dominant defense that reigned supreme in the National Championship?

I believe that Alabama has the easier route to the title this season. Recruiting is always easy when you’ve been good for so long, and their program certainly has what it takes to win another title. Expect both teams in the College Football Playoff. again this season.