Down Goes Louisville! NCAA Looking At A New No. 1 In Next Week’s Polls 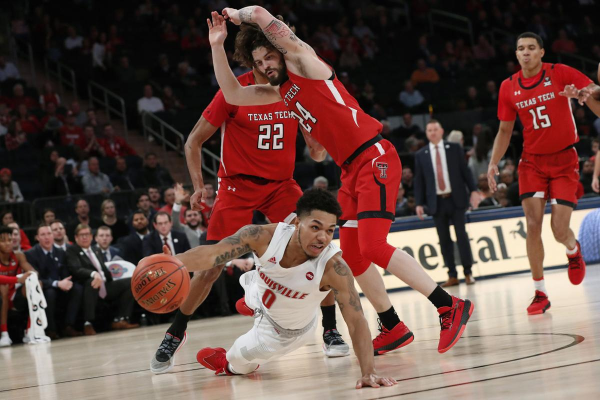 The college basketball titans continue to fall throughout the first half of the 2019-20 season. Joining the likes of Michigan State, Duke, and Kentucky, Louisville became the latest No. 1-ranked team to fall after being overwhelmed by Texas Tech on Tuesday night.

Due in part to a spirited defensive effort by the Red Raiders, the Cardinals played their worst offensive game of the year. As a team, Louisville shot just 34 percent from the floor.

Forward Jordan Nwora is the Cardinals’ leading scorer by a wide margin, averaging 20.8 points per game. Against Texas Tech, Nwora managed just 14 points by hitting just one of his seven shots from beyond the arc and four of his 16 shots from the field.

Rather than asserting their dominance as the top-ranked team in the nation, the Cardinals were undone by the highlight-reel blocks of walk-on Avery Benson and the three-point daggers of Davide Moretti.

Texas Tech proved it was every bit a worthy opponent to No. 1 Louisville by taking a three-point lead into halftime at Madison Square Garden. And with a dominant second-half performance, the Red Raiders earned the 70-57 victory that sinks another top-ranked team.

Another wild evening of college basketball saw No. 1 Louisville fall to Texas Tech, and No. 4 Maryland lose to Penn State. With those results, Tuesday evening served as another not-so-gentle reminder that parity is alive and well in the sport of college hoops.

Week 7 of the season will now have a new No. 1 team atop the polls. After No. 2 Kansas dominated Milwaukee by a score of 95-68 Tuesday night, there’s little reason to suspect it won’t be the next team to try its hand at No. 1.

But how long will the Jayhawks last?

Kansas or whatever team takes over as No. 1 will be the fifth new top-ranked team over the first seven weeks of the season.

Only 9-1 Duke and 9-1 Louisville held the top spot in the nation for more than a single week.

Michigan State opened the year as the preseason No. 1 but was immediately beaten by Kentucky in the season opener. Kentucky then took over but was quickly taken down by Evansville in one of the largest upsets in college basketball history.

Then it was Duke’s turn. The Blue Devils would survive a few games at No. 1 before running into Stephen F. Austin and losing by layup at the buzzer in another huge upset.

And finally, Louisville enjoyed its top-ranked status for less than two full weeks before suffering a blemish on its 9-0 record with Tuesday’s loss to Texas Tech.

So, is this early-season turmoil a preview of what to expect come tournament time?

Who will be No. 1 next week? Perhaps the 8-1 Kansas Jayhawks will move up a single slot and take its turn. Don’t be surprised if No. 3 Ohio State, which has blown out Villanova, North Carolina and Penn State, leaps over Kansas to earn the top ranking.

Either way, the new No. 1 won’t have long to enjoy its time atop the mountain if the first six weeks of college basketball are any indicator.

And that parity has extended itself to the betting world. To reach the Final Four, a whopping 15 teams have odds of +600 or better. Twelve of those teams are sitting at +350 or better.

To win the national championship, Louisville currently leads the way with odds of +900, but we just saw the Cardinals fall, and a total of 14 teams hold odds of +2200 or better in that regard.

And even the majority of conferences have plenty of competition at the top. But this is where you may very well find the safest bet in college basketball.

While there are four teams with +500 odds or better in the ACC and SEC, the American Athletic Conference has the largest gap between the favorite and the next team. While No. 13 Memphis is the +170 favorite to win the conference, 6-3 Cincinnati is second with odds of +450.

With so many teams going down at the top of the college basketball world, there aren’t many safe bets to be found.