Champions Classic Tests Teams Early; How Many Will Be In Final Four? 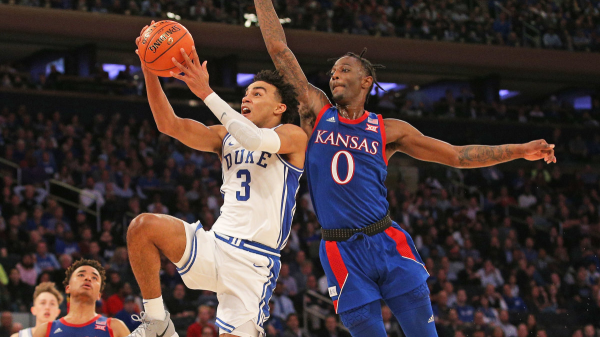 Although March Madness is still about four months away, it’s never too early to see the blue bloods of college basketball get the season started. So, when four of the teams likely to hold some of the top seeds of the NCAA Tournament – Kansas, Duke, Michigan State, and Kentucky – got set to tip off on Tuesday, all eyes shifted to the Champions Classic.

This year’s featured openers in Madison Square Garden were more than just four of the sport’s best teams going at it. The Champions Classic was about two of the quintessential, modern college basketball programs that reload with new freshman talent every year going up against two titans of college basketball who prioritize experience over potential.

We had the Kansas Jayhawks versus the Duke Blue Devils, and then the Michigan State Spartans versus the Kentucky Wildcats. Let’s take a look at how each game played out, and then decipher each team’s chances of reaching the Final Four when the all-important tournament comes around.

It doesn’t get much better than No. 3 versus No. 4 on the opening night of college basketball, and that’s exactly what we got with the Jayhawks taking on the Blue Devils. And as their respective rankings suggested, these two squads are separated by very little.

In the end, Duke was able to outduel Kansas in a 68-66 contest on the back of sophomore Tre Jones’ 15 points and freshman Cassius Stanley’s 13, 11 of which came in the second half.

While the likes of Zion Williamson, RJ Barrett, and Cam Reddish are no longer wearing Duke blue, this year’s Blue Devils team figures to be deeper and more balanced than last year’s iteration.

For the Kansas Jayhawks, Devon Dotson and Ochai Agbaji led the way. Dotson turned in a team-high 17 points, and Agbaji added 15 points of his own. The trouble for this duo was the 11 combined turnovers that Duke was able to take advantage of.

With Kansas-Duke serving as a mouth-watering appetizer, the stage was then set for No. 1 Michigan State to take on No. 2 Kentucky. By creating a 10-point gap between the two in the first half, the Wildcats were able to hang on through the final minutes to earn a 69-62 victory over the top-ranked Spartans.

To nobody’s surprise, the night belonged to a Kentucky freshman. The Wildcats are used to reloading with young talent that will likely leave for the NBA at season’s end, and this year is no different.

For Tyrese Maxey, who turned 19 a day prior, this was the perfect stage to show what he could do. Coming off the bench, Maxey exploded for a game-high 26 points that included a dagger three-pointer with a minute to play.

The Spartans can chalk this one up to early-season rust or jitters, but they’ll need to find a second scorer behind star guard Cassius Winston. While Winston went for 21 points on the night, no other Michigan State player reached double digits.

We enjoyed an opening night filled with the four top-ranked teams in college basketball, but how many of them will be around when we arrive at the Final Four?

Most Likely To Reach Final Four

Whether carried by youthful talent or age and experience, these four teams figure to play important roles when March Madness comes around. But which of these teams can we expect to see when only four squads remain at the end of the year?

Of the four blue bloods who took part in the Champions Classic, only one – Michigan State – reached the Final Four in 2019. Both Kentucky and Duke were a single game away after making it to the Elite Eight, and Kansas was knocked out early in a round-of-32 shocker.

So, who has the best chance of getting to the Final Four this year?

With odds of +1400 to win March Madness, the Jayhawks are in a group of three teams that also includes Memphis and Louisville. That gives Kansas the fourth-best odds in the country.

Directly ahead of Kansas is Duke, which carries +1000 odds of winning it all this year. Kentucky holds the second-best odds of +800, and the Spartans are this year’s preseason favorite with odds of +600 to win the NCAA Tournament.

So, while we know to expect several rounds of upsets and buzzer-beaters, Michigan State appears to have the best chance of reaching the Final Four this year.