Evansville Pulls Massive Upset Of No. 1 Kentucky At Rupp 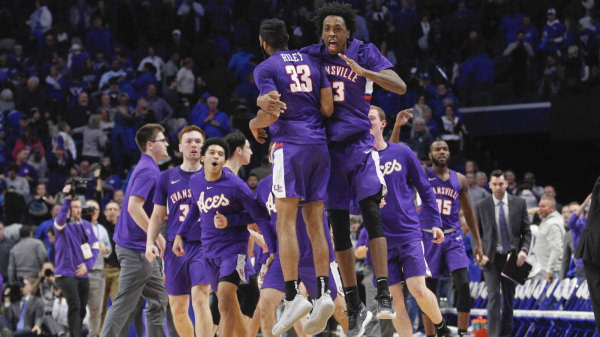 Last year, the Evansville Purple Aces finished the season with a record of 11-21 while going 5-13 in Missouri Valley Conference play. This year, the Purple Aces were picked to finish eighth in the MVC in a preseason poll.

None of that mattered Tuesday night when Walter McCarty’s Evansville team went into Lexington, Ky., and earned the most shocking college basketball upset in recent history over the No. 1 Kentucky Wildcats.

Kentucky’s loss marked the first time an AP No. 1-ranked team lost at home to an unranked nonconference opponent.

And after Kentucky defeated then-No. 1 Michigan State in the season opener a week ago, this loss marked the first time in the AP poll era that two No. 1-ranked teams both lost in November.

Coming into this matchup, the Wildcats had won 52 consecutive games against unranked opponents on their home floor in Lexington. After the 67-64 upset, they’ll have to start that streak all over again. When the buzzer sounded, and Evansville won the game, the Purple Aces matched the third-largest betting upset in a game between two Division I teams over the past 15 years after entering the contest as 25-point underdogs.

Despite going up against the top-ranked team in the country, Evansville was the squad going home with an undefeated record of 2-0 after dropping the Wildcats to 2-1.

How The Upset Unfolded

Rather than jumping out to a huge lead and hanging on for dear life or using a wild comeback after the more talented team took its foot off the gas, Evansville led the majority of a close game and answered every Kentucky rally.

In the end, it came down to the final 6.8 seconds of the game, when Evansville’s Sam Cunliffe went to the free-throw line with a one-point lead. After Cunliffe hit both shots, Tyrese Maxey missed a three-pointer at the buzzer to seal the game’s fate.

An interesting twist to this particular contest is that Evansville didn’t shoot particularly well. Of their 30 three-point attempts, the Purple Aces made just nine. Evansville also shot 38 percent from the field, which ended up being good enough to top the 37 percent of Kentucky.

And against a bigger, stronger Wildcats team that will likely send multiple players to the NBA, the Purple Aces outrebounded the No. 1 team in the country 38-35.

Including his two free throws that helped to seal the game, Cunliffe scored 17 points and added six rebounds off the bench for the Purple Aces. Guard K.J. Riley led the team with 18 points while making all eight free throws and both of his shots from beyond the arc.

Evansville was able to outlast a Kentucky team led by Immanuel Quickley’s 16 points and nine rebounds, and Maxey’s 15 points.

The Purple Aces were better on the day they went into Lexington, and they now have an upset over the top-ranked team in the nation to show for it.

According to the odds, there’s a duo of teams who have slightly separated themselves as favorites to win the NCAA Tournament. Michigan State, which Kentucky beat last week, leads the nation with +650 odds of winning it all.

Next up are the Wildcats, with +800 odds, followed closest by the Blue Devils of Duke at +950.

So, in addition to knocking off the No. 1 ranked team in the country, Evansville also upset the team with the second-best odds of winning the national championship on its home floor in an upset to remember.