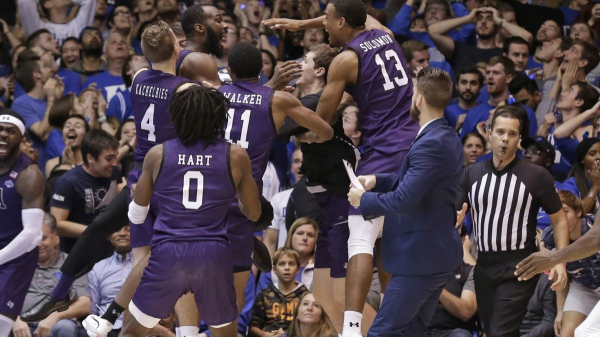 The last thing you could hear before a final-second score earned Stephen F. Austin a milestone victory over top-ranked Duke was the hush of the crowd as the ball floated through the air. One second later, the away bench rushed Nathan Bain in celebration after his layup earned the Lumberjacks an 85-83 victory at the buzzer.

We’ve had plenty of madness well before March in this college basketball season. Earlier this year, No. 1 Kentucky was playing on its home floor when it fell to Evansville.

The same thing has now happened to the No. 1 Duke Blue Devils, who entered Tuesday’s contest as 27.5-point favorites.

Stephen F. Austin handed Duke its first non-conference loss at home since the year 2000, and it needed every last second of the game to do so. The upset surpassed 26-point underdog Gardner-Webb’s victory over Kentucky in 2007 to mark the biggest upset over the past 15 seasons.

To make the shocker even more unlikely is the fact that the Lumberjacks had to rally from a 15-point deficit just to give themselves a chance.

In the end, another top-ranked team fell as Stephen F. Austin pulled off the stunner at Cameron Indoor.

How The Upset Unfolded

It was all going according to plan for Coach Mike Krzyzewski and the Duke Blue Devils, as they earned a 15-point lead over the visitors. Then it all started falling apart.

In addition to rallying back to take the lead in the second half, Stephen F. Austin used a Gavin Kensmil layup with 19 seconds remaining in regulation to force overtime after Duke’s Cassius Stanley was unable to convert a jumper at the buzzer.

Overtime was a low-scoring affair, as only three buckets were scored.

It all came down to the final seconds when Duke had the ball and a chance to win with the score tied at 83 apiece. Tre Jones missed a jumper, but Duke recovered the loose ball after two Stephen F. Austin players failed to corral the rebound.

The ball was kicked out to Jones once again, who tried to feed a penetrating pass to Matthew Hurt. The play resulted in another loose ball with fewer than seven seconds remaining.

Kensmil dove on the free ball, flipped over, and dished a quick pass to Bain. Rather than using a timeout, Bain split a pair of Duke defenders and drove the length of the floor.

Bain managed to release the layup just before time expired, and his buzzer-beater took down No. 1 Duke by a score of 85-83.

The 2019-20 season has already included two of the four largest upsets by a Division I team over the past 15 seasons of college basketball.

With Evansville’s upset of 25-point favorite Kentucky earlier this year, the Purple Aces matched the 25-point upset by Wofford over No. 5 North Carolina in 2017.

Gardner-Webb held the previous record with a win over No. 20 Kentucky, which was a 26-point favorite in 2007.

And now the crown has been passed to Stephen F. Austin after Tuesday’s stunner over 27.5-point favorite and top-ranked Duke.

In addition to the fall of the No. 1 Blue Devils, the No. 3 Michigan State Spartans also lost this week. That means we’re likely to see a relatively large shakeup in the college basketball rankings.

The Louisville Cardinals, who are ranked No. 2 this week, play Western Kentucky on Friday.

For now, Michigan State and Duke remain the two favorites to win the national championship, but we could see those numbers move after upsets. The Spartans lead the way with odds of +750, followed by the +900 odds of the Blue Devils.

The pairing of Kentucky and Louisville are next on the list, both sitting on odds of +1000.