Warriors In Trouble: What are the Odds They Come Back and Win This Series? 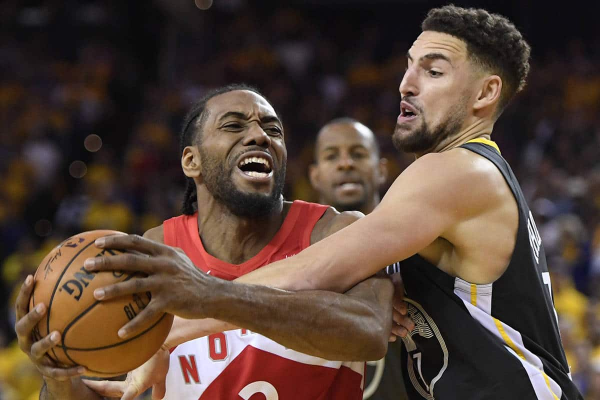 Tonight, the Golden State Warriors put their dynasty on the line against the upstart Toronto Raptors. Do the Raptors achieve a shocking finishing blow, or will the Dubs continue their historical Finals dominance?

With the Warriors down 3-1 to the Raptors, very few people predicted such an outcome — or is this the outcome? Forgive me for stating the obvious, but we all know the series isn’t over until someone wins four games. Though by all accounts, the public perception, the bookmakers, it seems like everyone is ready to call the series when the Raptors play tonight in Game 5.

But there is a strong contingent of believers (or non-believers if you will) that think there are a lot more games to play in this series. So what are the odds the Warriors come all the way back and do something only done once before in the history of the NBA Finals?

In some markets, the Warriors were as high as +500, but as recent news regarding Kevin Durant’s possible return has emerged, it does seem apparent that money has moved on the Warriors to win the series, with bettors gambling on a Durant return making the difference in the series.

Bettors who grabbed the series price on the Raptors have an arbitrage opportunity to buy the Warriors at a bigger price point and could easily guarantee a profit, assuming they don’t think there is more value on letting their pending series bets ride on a Raptors victory.

Series prices take into account implied odds, injuries, as well as price points for various games, so essentially, a Warriors wager to win the series is a bet on Warriors moneyline three times in a row, including tonight’s game.

As insurmountable as the numbers indicate, is this a worthwhile wager? Should bettors believe in a comeback miracle, or is this series just a delay of the inevitable in action?

Based on the numbers crunched by the books for today’s game, the Warriors have an implied 47-percent chance of winning the game straight up. The Raptors are -1.5-point chalk, but market fluctuations on the spread have resulted in varying numbers in the offshore and domestic US sportsbooks.

The total is at 214.5, and while last game went over the total, the over has been 3-1 in games played thus far in the series.

So what does this mean for the Warriors having a shot in the series?

Do the Warriors Come Back?

A Warriors comeback in the series is entirely incumbent upon the health of Kevin Durant. As presently constructed, the Warriors are too fatigued and injured to sustain the pace and tempo that Toronto likes to play. While the Warriors are a fast-paced team in their own right, the defensive energy and transition offense of Toronto has been triggered by defensive stops and turnovers.

A Durant return means the pace will be more controllable, as Durant is primarily an isolation scorer in the halfcourt. The latest reports indicate that Durant a game-time decision and “plans to play,” this according to a just-broken news report.

Plain and simple: only one team has come back from a 3-1 deficit in the NBA Finals, and it was the 2016 Cleveland Cavaliers led by LeBron James and Kyrie Irving, but they relied on a critical suspension of Draymond Green and historic performances from Irving and James.

That same season, the Warriors managed to come back from 3-1 against an Oklahoma City team led by KD and Russell Westbrook in the Western Conference Finals, but this is an entirely different animal.

Bettors are getting a deflated price on a Warriors team that is beaten up and failing to click at the right time. Despite a Durant return, it’s no guarantee of a Warriors victory. Bettors are unaware of just how durable or capable Durant will be, and it remains to be seen if he can change the dynamic in a positive way for the Warriors. Durant, while a difference maker, is not the only antidote to a Warriors comeback, but if you like your chances, snag +400 while you have it because a Warriors win will drastically shift that price going forward.

But remember, it’s not all about the Warriors. Toronto, led by likely Finals MVP Kawhi Leonard, is playing the series of the franchise’s existence at just the right time.