Warriors Battle Back and Take Control — Is It Over for Toronto? 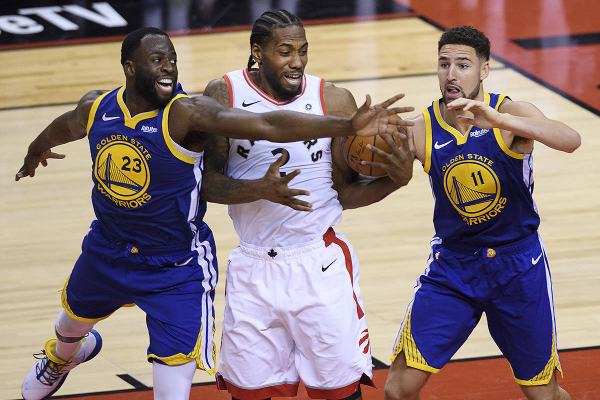 After a devastating Game 2 loss, will the reeling Toronto Raptors throw in the towel against the Golden State Warriors?

Despite opening as short favorites, the Raptors suffered a crushing blow in Tuesday night’s contest against the Warriors — who closed as 2.5-point dogs. After managing to knot up the series 1-1, the betting implications drastically shift going forward. Now, the pressure is on the Raptors to battle back and retake control of the series, so which angles should bettors keep in mind going forward as the teams tip-off on June 5 in the heart of Bay?

Shift in Lines and Total

Even though they are bruised with injuries, the Warriors have sustained. DeMarcus Cousins, who recently returned from a quad injury, managed to have a much more efficient Game 2. Klay Thompson and Steph Curry combined for a healthy night with 48 points. Given the high-scoring effort from both, it’s apparent that despite the absence of Kevin Durant, they are more than likely going to have no trouble at all continuing to facilitate the scoring load needed with Durant’s absence.

Depending on the marketplace, which is sure to shift in the coming days as tip-off approaches, the line and totals are set, both liking the Warriors to take control and achieve a commanding 2-1 lead over the Raptors.

Current moneyline prices are set at -250 favoring the Warriors, giving them an implied 71-percent advantage, a rather commanding rate. A $100 bet on the Raptors to take Game 3 would net a bettor a little over $200.

The Dubs are 6-point chalk, and the totals are set at a respectable 213, the exact total points scored in Game 2. Aside from shifts in the totals and lines, the Warriors taking control also managed to shift the series prices.

Shift in Series Prices — Is There Value?

Toronto losing homecourt advantage and the implied advantage given to the Warriors by the books has resulted in a major shift in futures values. Despite being short favorites at one point, the Warriors are now back to essentially pre-series betting prices to win the NBA Finals.

Current market prices have returned the Warriors back to their implied series dominance, with them being set as -290 favorites over the +245 Raptors, who now have lost their homecourt advantage unless of course, they can steal another game.

Game 3 is a pivotal game for those looking to cash in on the series prices. A middling opportunity, albeit a slim one, exists if you took the Warriors in the series in Game 2 and now can skim a very small amount off the top either in Game 3 or possibly Game 4 if the Raptors fail to knot things up in Game 3.

Toronto bettors who still like the Raptors to retake the series advantage can now grab the Raptors for a great price, although they may be better served grabbing them if the Raptors are unable to take either game on the road.

MVP odds have shifted, with Steph Curry having a considerable advantage over the next closest player, Kawhi Leonard. Steph Curry has yet to win an NBA Finals MVP award, but oddsmakers like him to be the favorite. If Durant’s absence persists, he may be a great bet since his winning of the MVP would essentially correlate with a Warriors victory.

Kawhi Leonard is +300 to win the award, and in essence, if you’re looking to grab extra value on a Raptors-to-win-the-series wager, this bet deserves a look. You’re getting a 55-cent bonus on what would basically be a Raptors series wager as a Kawhi Leonard Finals MVP is correlated with a Raptors victory.

We still have a lot more basketball to play, but keep these numbers in mind when making your wagers.