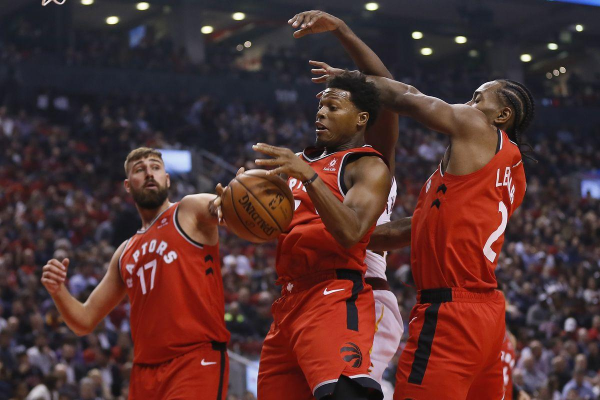 Friday night will feature a matchup of Eastern vs. Western Conference as the Toronto Raptors (23-7) travel to the Moda Center to take on the Portland Trail Blazers (15-13). For the Raptors, they currently lead the Eastern Conference by 3.5 games over the Milwaukee Bucks and have just played fantastic basketball all season long. Toronto has won two games in a row, including an impressive 113-93 win over the Golden State Warriors on Wednesday. In that game, Kyle Lowry led the team in points (23) and assists (12) while Serge Ibaka led the team in rebounds (12). For the Trail Blazers, they currently sit in third in the Northwest division and 9thoverall in the conference. They are looking to bounce back after two straight losses, including a 92-83 loss to the Memphis Grizzlies on Wednesday. The 83 points were their lowest output of the season. Tipoff for Friday’s game is scheduled for 10:00 pm ET. The Raptors come into this game favored at -3 on the road.

On the offensive side of the ball, the Toronto Raptors have statistically been the better team. According to basketball-reference, when looking at adjusted offensive rating, which estimates the number of points scored per 100 possessions when also taking into account the strength of opponent’s defense, the Raptors rank 2nd in the NBA, only behind the Golden State Warriors, with 114.61 points. The Trail Blazers come in at 11th with 111.42 points.

It is pretty similar on the defensive end, too. In terms of adjusted defensive ratting, which estimates the number of points given up per 100 possessions when taking into account the strength of the opponent’s offense, the Raptors rank 7th, giving up 106.29 points while the Trail Blazers come in at 14th, giving up 109.44 points.

When the Toronto Raptors traded star DeMar DeRozan over the offseason for Kawhi Leonard, there were a lot of skeptics as to whether it was the best move for the Raptors, not only from a personnel standpoint but from a chemistry one as well. A third of the way into the season, the trade looks to be pretty solid. In 22 games this season, Leonard is averaging 26.1 points, 8.3 rebounds, and 3 assists. While the Raptors have taken it easy on his workload, giving him several days off, the team has played well both with and without him. Still, when he is in the lineup, the Raptors not only have the superstar that other teams have to account for, but their depth can give teams fits as well.

For years now it seems as if the Trail Blazers have two elite scorers in Damian Lillard and CJ McCollum, but very little else. This season has been no exception as these two have led the way. Lillard is averaging 27 points per game on 43.9% shooting. He is also averaging 5.1 rebounds and 6.1 assists per game. For McCollum, he is averaging 22 points on 47.2% shooting. He is also contributing 3.9 rebounds and 2.5 assists.

The problem is where do the other contributions come from. The Trail Blazers only have one other person averaging double-digit points, and that is Jusuf Nurkic. He is averaging 14.5 points, 10.5 rebounds, and 2.3 assists. Al-Farouq Aminu is averaging 9.4 points and 8.2 rebounds, but other than that the points are hit and miss. As a result, if opposing teams can contain Lillard and McCollum (which can be easier said than done), the Trail Blazers don’t have a ton else to throw at you.

Raptors Win On The Road