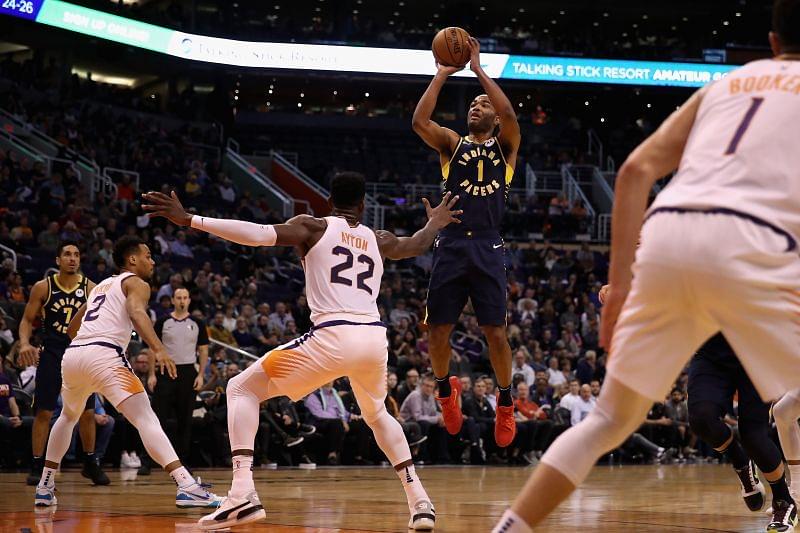 Two of the NBA’s best teams, at least from a record standpoint, face off tonight as the Indiana Pacers (6-2) host the Phoenix Suns (6-3). Tonight’s matchup tips off at 7:00 pm ET, with NBA betting odds seeing the Pacers favored by three at Fanduel, along with a game total of 216.

Both teams are in good form and sit in second place overall in their respective conferences. Phoenix lost in overtime at Detroit last night, so they will be eager to get back in the win column. The Pacers shut down James Harden in taking down the Rockets on Wednesday and are aiming for a third win in a row over a Western Conference opponent. The NBA betting odds favor a home win, but the Suns have been the league’s best defensive team early on and will be a tough out.

The Suns entered the season with a lot of buzz after their 8-0 bubble performance and the offseason acquisition of future Hall of Famer Chris Paul to bolster their youth-centered team.

So far, they have not done anything to lessen the buzz, even with losses in two of their last three games to the Clippers and Pistons. For all of the weapons they possess, their defensive success this season is most notable. The Suns are holding opponents to a league-best 103.2 points per game, with the Cavaliers (103.3) and Knicks (104.1) the only other teams allowing fewer than 106 points per game.

On the offensive end, Phoenix is only 21st in the league in scoring at 109.2 points per game. However, that is not down to severe struggles. The Suns are 12th in shooting percentage and 10th in three-point percentage, which is respectable. Also, they have seven players averaging double figures in points. Devin Booker is leading the way, averaging 21.7 points per game after averaging over 26 each of the last two seasons. With so many other sources contributing, he has been shooting less and has not crossed the 30-point mark yet, but he has scored at least 20 points in all but one game.

The Pacers were not busy in the offseason in regards to bringing in new faces. But they did fire coach Nate McMillan and hire Raptors assistant Nate Bjorkgren to try to end the franchise’s run of five straight first-round playoff exits.

It looks like a good fit early on. Malcolm Brogdon (23.6 ppg/4.1 rpg/7.0 apg) is off to a stellar start, and so is Domantas Sabonis (20.8 ppg/11.4 rpg/6.4 apg). Also, Victor Oladipo (20.4 ppg/6.0 rpg/4.3 apg) came out of the gate strong, though he has struggled shooting recently. That he is still firing with regularity is a positive sign, given that he averaged only 12.9 shots per game last season. Like the Suns, the Pacers have seven players averaging double figures. That includes bubble hero T.J. Warren, who is out indefinitely due to a stress fracture in his left foot. With Brogdon and Sabonis playing so well and Oladipo more eager to shoot, Warren’s absence may not be felt as much.

For best NBA bets for this matchup, it’s all about the player performance props here. Malcolm Brogdon has gone for 33, 21, and 35 in his last three games.Brogdon to score 20+ points and the Pacers to win at +200looks rather tasty.

Also, he has hit 15 of 25 threes in his last three games and has hit at least two threes in all but one game, which makesBrogdon to hit 2+ threes and the Pacers to win at +140equally tasty.

The tastiest player prop of all, however, isDomantas Sabonis to record a double-double and the Pacers to win at +124. Sabonis has had a double-double in every game so far. With that kind of run going, you can’t help but like those odds if you are also backing a Pacers win.

This should be a good contest between two rising teams, and it could come down to the final minutes. In the end, the Pacers will hold serve at home and continue their hot start. Back the moneyline.

When it comes to the total, it could run tight on the over or under if it is indeed a close game. But a much better bet is on the under on Phoenix’s team total. Six of the Pacers’ eight opponents have been held under 108 points, with a seventh being held under that mark in regulation in an overtime game. Also, Phoenix has scored 108 or more points only three times.