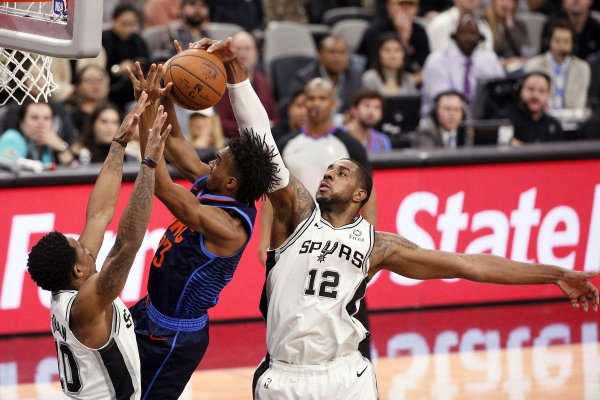 It is a battle of West versus East on Wednesday as the San Antonio Spurs (27-21) travel to the Wells Fargo Center to take on the Philadelphia 76ers (31-17). For the Spurs, they come into this one 4-4 over their last 8 games, including a 103-95 loss to the Clippers on Sunday. Currently 6th in the Western Conference, they are trying to stay in contention in a loaded conference. For the 76ers, they currently sit in 4thplace in the Eastern Conference, but only 4.5 games behind the first place Milwaukee Bucks. Having won 4 of their last 5, they are hoping to take care of the Spurs on their home court. The two will square off on Wednesday with tipoff scheduled for 8:00 pm ET.

In this contest, the Philadelphia 76ers come in as 4.5-point favorites playing at home. The moneyline comes in at the Spurs +159 and the 76ers -189.

Both of these teams are relatively similar in their statistics to this point. In terms of adjusted offensive rating, which estimates the total points scored per 100 possessions while also taking into account the opponent’s defense, the Spurs rank 5th in the NBA at 113.67 points. For the 76ers, they come in at 10th with 112.55 points.

On the defensive side, it is the 76ers who come out slightly ahead in adjusted defensive rating, as they rank 14th, allowing 109.86 points per 100 possessions while the Spurs come in at 17th, allowing 110.81.

Even with the “Big-3” of Duncan, Parker, and Ginobili being a thing of the past, coach Gregg Popovich is still showing why he is the best in the business. With a much more limited cast, he has his team not only with a winning record but in the midst of a stacked Western Conference.

Past these two, there is certainly a drop off in scoring, but they do have some nice depth pieces. Rudy Gay (13.9 points, 6.5 rebounds), Bryn Forbes (12.1 points, 5.2 rebounds), Marco Belinelli (10.8 points, 2.3 rebounds) and Patty Mills (9.3 points) are all having decent seasons. Still, to beat Philadelphia on the road, they are going to have to get production on both sides of the floor from top to bottom.

If it weren’t for players like James Harden, Joel Embiid would probably be in a lot of MVP discussions. The Philadelphia center is averaging 27.1 points, 13.2 rebounds and 3.6 assists per game. He is also shooting 49.1% from the field and 80.1% from the free throw line. In the backcourt, Ben Simmons has continued to put up solid numbers scoring 16.5 points per game, while also adding 9.5 rebounds and 8.1 assists.

The two other main scoring threats have been Jimmy Butler and JJ Redick. For Butler, since being acquired in a trade he has played relatively inconsistently in a Philadelphia uniform. Still, when right, there is no denying his potential. On the season, he is averaging 19.6 points, 4.9 rebounds, and 3.7 assists. The other main scoring threat, JJ Redick, is dynamite from behind the arc. The sharpshooter is shooting 37.9% from the three and is averaging 18.4 points per game. He is also shooting 90.1% from the free throw line.

This one is all about the home/road splits for me. To date, the 76ers are a dominating 20-5 at home while the Spurs are 9-14 while playing on the road. The 76ers aren’t perfect, especially as Jimmy Butler (who is questionable for this game) has not quite gelled like the team would have hoped alongside Ben Simmons and Joel Embiid. Still, Embiid has shown that he can be unstoppable and I am not sure that the Spurs have a legitimate answer for him in the post. If their dominant home play was evident enough by the record, the 76ers showed how dominating they can be by totally waxing the Rockets on Monday, 121-93 at home. I think this one is close throughout much of it, but ultimately, I see the 76ers pulling away at the end. I am taking Philadelphia despite laying the 4.5 points.